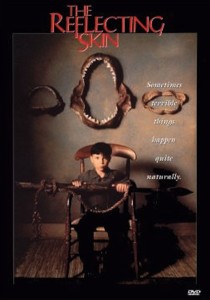 Twin Peaks was wilfully weird but knew this, going further and further into the absurd and occasionally poking fun at this very fact.

The Reflecting Skin is also especially weird, but unlike that film (and tv series) it lacks that internal honesty. The weirdness here never acknowledges itself, which somehow makes it weirder. But also less effective and harder to embrace

Let’s just say that if I thought it sensible to name a character Dolphin Blue and have no one point this fact out for comedic effect, I’d want to shoot a wink through to my audience somehow…

In post war 1950s America exists a small town. A town so small everyone knows everyone, and no one has any secrets.

In this town Seth is a young kid. The child of the couple who own and operate the tiny service station. Seth and his two young buddies get up to the usual stuff, exploding frogs and playing pranks on each other and strangers. While mischievous Seth and co are hardly evil, they just need something to fill days that would otherwise be empty.

At home his mother fills the days with religious study and pining for her older son that went off to war, and his father fills the day reading crazy sci-fi novels about monsters and aliens.

It is through one of dad’s stories that Seth learns of the existence of vampires, and he immediately transposes this knowledge to the decision that the strange woman who lives outside town. Of course she must be a vampire.

After a sudden and tragic development Seth’s older brother Cameron (Viggo Mortenson) arrives home, ashen faced and not wanting to discuss his recent past, he is nonetheless a welcome arrival in a sad existence.

The film becomes increasingly Twin Peaksian once Cameron meets Dolphin Blue and kids – including Seth’s chums – go missing. You’ll have to at home the film to decide for  yourself whether this is more Near Dark or the Twin Peaks via Shotgun Stories. Whatever your decision though this is at least well crafted and sincere (albeit slightly pretentious) fare, with some genuine tension and uncertainty generated. Ultimately though I couldn’t possibly decide whether it is worthwhile or not, so I have once again given my cop-out (but rarely granted) 6.7.

Final Rating – 6.7 / 10. An at times fascinating but ultimately perplexing work that will divide opinions.