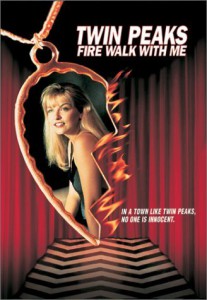 Sunday is French for tree!

This was listed at #1 in an online article about forgotten or underrated gems in cinema. I’d seen it a long time ago but thought maybe I wasn’t mature enough in my teens to “get it” and that it might deserve another shot. After all, I am like totally mature now right?

Look I know David Lynch is supposed to be a maverick genius, a visionary with an eye for the sublimely ridiculously and the ridiculously sublime. A man who can make you sick and then make you think, but all this crap is just too much.

All I remember from the original TV series or film = “A body… wrapped in plaaaastic.” & “Who killed Laura Palmer”, then 2 or 3 years before anyone found out who, and by now no-one cares or remembers anyway. Like this film an exercise in marketing and style over substance.

We open the film. A young girl is dead, it is not (yet) Laura Palmer (Sheryl Lee).

The detectives examine the body and go for a late supper…

Laura’s Dad is a creepy fucker…

Laura doesn’t want her friend to end up like her.

Laura’s Dad really is a creepy fucker… One last meeting…

Twin Peaks is one fucked up town…

This film is like someone listened to the lyrics of a Beck album and decided to make it a film. It is convoluted and pointless, and manages to drag out a 20 minute point for 2+ hours.

Laura Palmer was a skank who lives in a creepy town full of creepy fuckers in a dysfunctional family with a lunatic freak of a father. She wallows in the seedy side of things and ultimately it should be no surprise to find that she was unfortunately murdered.

Final Rating – 6 / 10. In some ways I think I am still stuck in the 90s. At times though I watch stuff like this and am glad it ended.