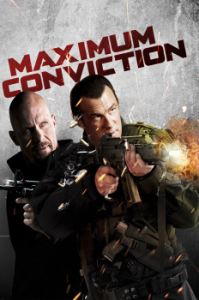 The fact is even a time machine could do little to save this formulaic mess. A film with aspirations of being The Rock crossed with Under Siege that ends up being unmemorable in every way.

Seagal has his painted on widows peak, well earned wrinkles and well entrenched extra pounds. He and Stone Cold are seeing out their days in a maximum security prison scheduled for closure. Then they are told they have one last job, looking after two sorta kinda hot (but not really) girls who pose no known threat beyond wearing dangerously white tank tops.

With dozens of inmates still aboard, there is much interest in these two newcomers, even though they are only supposed to be there one night, and not all of the interest comes from inside the walls.

Eventually some bad guys force their way inside. Turns out the gals are important beyond making Steve Austin’s tummy feel funny, and Stone Cold and Seagal must ward off the incursion.

Logic says Stone Cold should be more mobile than Seagal, nonetheless it is The pony-tailed Italia-ninja who performs most of the hand to hand stuff. It is amusing and obvious though that while he still has some moves, he can no longer perform them without much editing. And needing of large wide shots to show them…

With a story spread too far there are several intertwining subplots, none of them interesting. Stone Cold swears quite a bit, Seagal tries some Arnie one liners, but not even the bad dialogue is worthy of discussion.

Maximum Conviction fancies itself as a buffet. There’s tough guys of many kinds, hot chicks, action and attempted humour. But it’s a crappy cheap hotel morning buffet, trays of mediocrity spread all over in the vain attempt at having sufficient options, when in fact it is hoping in vain that you will be hungry enough to fall for something…

Final Rating – 5.5 / 10. Perhaps the biggest mistake was suggesting there would be a sequel. That’s maximum conviction.