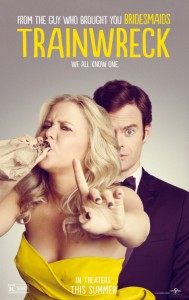 Trainwreck isn’t. Nor is it the film that unveils the comedic genius of Amy Schumer. Instead it unveils her shtick, an oddly apt phrase because it seems the core of Schumer’s being is that she is a ‘female-guy’.

Amy plays ‘Amy’ (helps avoid confusion). She drinks to blackout and takes drugs; every female-guy has that phase y’know. She has meaningless sex with strangers; female-guy’s gotta sow the oats. Amy treats sex selfishly (“Finished. I’m going to sleep.”) and leaves abruptly without bothering to come up with an excuse; just female-guys being female-guys.

The ‘walk of shame’ is not for Amy, it is for the guys she uses. Amy regrets nothing. The next morning Amy sobers up, refeuls, dons her ‘beergarden-glam’ outfit and goes again.

The life of the female-guy.

But as with every Judd Apatow film, the essentially nice person with one glaring phobia must come face to face with that fear. With The 40 Year Old Virgin it was sex. With Knocked Up it was responsibility. With This is 40 it was growing older…

…with Trainwreck it is *gasp* love. The kryptonite of every female-guy.

Amy is a regular New Yorker female-guy. She lives in an apartment, has a 9 to 5 that provides her with an income, a sister (Brie Larson) that provides her with a family measuring stick, an aging father (Colin Quinn) with a degenerative mental condition that provides frustration and aggravation, a beautiful vacuous musclehead (John Cena) that provides meaningless sex with no strings, and a bunch of colleagues and acquaintances played by stand up comedians – a homeless Dave Attell stands on the pavement in front of Amy’s apartment launching an endless stream of zingers. Where can I sponsor one of those?

As a writer for a snarky hot take bitch mag – one pitch for a story; “You call those tits?” – Amy and her co-workers vie for the attention and admiration of the queen bitch, editor Diana (a hilariously vile Tilda Swinton). Even though she has no interest in sports, Amy is given a story on a surgeon to the stars, in this case the stars being elite highly paid athletes. Amy’s disgust at all things sports should give her a unique angle thinks Diana – and the film.

The surgeon is Aaron (Bill Hader) an amiable and pleasant man with an unguarded nature. Despite the contrasting views on the worth of the athletes he assists, Aaron instantly recognises the chemistry he and Amy share, and guilelessly breaks down her attempts to build a ‘wall against commitment’.

Aaron represents a peculiar kind of challenge. He is a genuinely nice guy with no hang ups or character flaws. He likes Amy and despite herself Amy likes him. This time around the guilt free ditching carries palpable guilt.

What’s a female-guy to do?

73.6% of the jokes – I counted – emanate from gender reversal. Amy’s discomfort at having to hang around after the ‘deed is done’ was apparently hilarious, as was the scene in which a protective LeBron James, one of Aaron’s clients and friends, grills Aaron on his ‘new man’. Except of course it’s a woman.

With the high heel on the other foot it is no wonder that Schumer has found a niche with her bluntness and lack of tact. Ironically the traits women seek to change in a man seem to be admirable in a woman.

She and Hader share a strong chemistry, though to be fair Hader could share a comedic chemistry with a lamp post, but for the most part even though this Train is packed with known comedians, it is those playing against type that you will remember best. John Cena doesn’t hang around long – his towel does… – but you won’t forget his attempted sexy talk. Tilda Swinton is deliciously evil and steals her every scene – Diana deserves a spin off of her own. LeBron isn’t even an actor, but he nails every line and scene like it was a breakaway dunk – Amar’e Stoudemire does not have the same success.

As with many Apatow films Judd the director cannot work out how to end the sketch Judd the writer penned. The joyous musical number in The 40 Year Old Virgin was incongruous but kinda worked anyway and was a Full Stop as good as any. Here there are two egregious missteps that close out the film on a sour note; the celeb filled intervention with special comments by Marv Albert is a Saturday Night Live pitch best left on the cutting room floor, and having Amy dress in the cheerleader outfits and bumble along with the Knicks cheerleaders was a horrible misstep, though it undoubtedly garnered a ‘gasp-laugh’ from sections of the audience.

Such is the lot of the female-guy. You have to be willing to risk being laughed at if you want to be laughed with. Amy Schumer has fearlessly leapt into the testosterone filled world of R Rated comedy. It is obvious that she has the timing and the jokes, she just seems a little too eager to show us her balls…

Final Rating – 6.5 / 10. Less riffy and more linear than other Apatow films, and at two plus hours Trainwreck needed a Diana-savage edit to enable it to get to the point sooner.