Deliver us from Evil (Review) 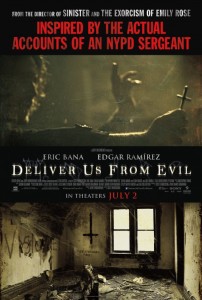 Not necessarily a sane one…

Ralph (Eric Bana) is a jaded streetwise cop who has seen everything and has developed something of a sixth sense that alerts him to the presence of ‘nasty’.

On this particular night, ‘nasty’ is everywhere, it is in the face of the violent wife beater, on the face of the woman who sees fit to throw her baby into the lion enclosure at the zoo, even in the conveniently exploding torso of the apparently murdered man they find in the cellar.

Ever the sceptic, Ralph labels each of the perpetrators of complainants as variants of ‘wacko’, ‘nuts’ and the cleverly hybrids ‘wack-job’ and ‘nut-job’.

I’m sorry, but it was obvious from the first minute to the minute that it became reality.

As the days progress Ralph follows the cases which all seem to be linked and pointing at one guy. He eventually teams with the handsome young Priest who forces him to question his beliefs, because the constant unsettling visions, demonic writing, people speaking in tongues and the reappearing psychopath with inhuman abilities just aren’t quite convincing him…

Deliver us from Evil wants to be Fallen but it is too clumsy and impatient, strange given it tops two hours. It has a recurring motif of the arrival of evil being preceded by songs by The Doors – even though the evil allegedly emanated from Iraq and not your grandpa’s tape deck, and it is head over heels in love with clichés.

Someone should tell the filmmakers that not every seen needs to be punctuated by a LOUD NOISE. In one fifteen minute span Ralph encounters a roaring lion, screeching monkeys, a loud cat and a barking dog. He also has the requisite issues with lighting. Torches constantly fail him and lightbulbs flicker as he nears, waiting for the appropriate time to blink out, inevitably reigniting just in time to see him face to face with the latest unpleasantness.

Histrionics and cliché aside, some of this works – repeat; some. I liked the fact that the film embraced the R rating (at least I hope it was R) with some truly gruesome imagery and effects, and regardless of whether they were original or even worked, it wants to scare you, not just sell tickets.

(And as for Eric Bana’s accent, I can’t begin to imagine the horror that it imparts upon American earlobes. It sounded like no accent from any American film that I can remember.)

Final Rating – 6 / 10. Deliver us from Evil doesn’t deliver us from much really, but it is an earnest but deeply flawed effort at providing an adult horror experience.