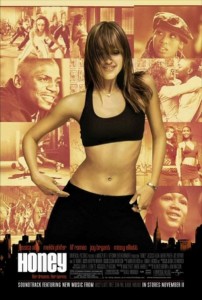 A long time ago, in a magical land where the women saw fit to wear but one sleeve at a time, and the menfolk all rocked different basketball jerseys regardless of the occasion, there lived a woman. A woman named Honey (Jessica Alba).

And now for this story I will move to the vernacular of the realm. The realm of Honey.

“Yo mad dudes be sweating Honey no-wum-sayin’ but she be all about dem moves. She be working crazy jobs waitin for the come up. She a hot barmaid. She a hot record store attendant. (Dey still have those?) But most she be a dance teacher. A hot dance teacher. To the impoverished youths and shit y’know?

And you just know she be teaching the hip-hop dancing. None of that stale white bread stuff wit’ the stiff back and the 1-2-3 1-2-3. This ain’t dancin’ with no stars. She thinks one young buck’s ‘Flava is hot’. (She references ‘flava’ quite a bit.)

One white dude rolls on Honey and puts her in his music videos behind music legends like… that guy… and that girl… look I didn’t know none of those guys… is Missy Elliot still a thing?

Honey be so very fly that she outshine all.

That white dude might look like Screech from Saved by the Bell but he smart. He put Honey in charge of the videos. Now she be ordering all the hoochies around like a boss yo.

Honey be loving this new money, power and respect sheeeeettt. She sees a future with less video bitches and mo’ flair and social messages and whatnot. Cos y’know times be hard in the streets. Some kid’s Mamas don’t be loving them like they should.

Honey see that! She see that she can be inspiring shorties with her gyrating hips and jiggling upper torso. She also see that the dance studio bills not be gettin paid. Them rich white folk be fixing to shut the building down yo. Now where the shorties going to shake they asses now?

No-one know what to do. But Honey know. She know that if shaking her lil ass in cargo pants got her this far, the she can shake her lil cargo pant wearin ass to the top!

Damn now the movie over Son.”

Final Rating – 5 / 10. Oh Honey, you taught me how to settle for clumsy sub-mediocrity and lazy emotional manipulation. Shake on little mama.