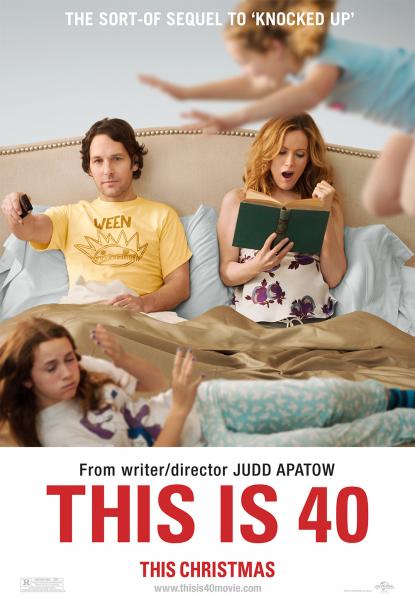 We first met Pete (Paul Rudd) and Debbie (Leslie Mann) in Knocked Up a few years ago, their relationship being the most interesting element of the film after it turned into a chick flick about way through.

They haven’t changed. In fact aside from the fact that both are now nudging 40, they are the same couple that were awkwardly hilarious in their limited screentime in 2005.

Pete and Debbie are more or less typical (very nearly) 40 somethings. Debbie is clinging to the thought of youth and telling everyone that her impending birthday is actually 38.

They have two young girls, Sadie is entering her teens and obsessed with the tv show Lost, and Charlotte a and inquisitive precocious 8. While they love and dote on their daughters they also look at them as the reason for their perceived lack of freedom.

As the movie opens the couple are planning birthday festivities. A low key family affair for Debbie (with no public acknowledgement) and a larger gathering for Pete. At a hastily convened family meeting it is announced that ‘some changes will be made’. Internet usage will be limited – which crushes Sadie – the family diet will be altered to reflect a healthier lifestyle, and Paul and Debbie pledge to be more active and maintain themselves better.

While the hub of the film is the family household, Pete runs a small indie music label catering to older, established acts (to minimise promotion costs) and Debbie owns a women’s clothing store with two staff, a hottie (Megan Fox) and a nottie (Charlyne Yi).

Pete’s label is struggling to remain afloat and is relying on its next album being a shot in the arm, and Debbie’s store is searching for a substantial loss, with the consensus being one of the staff is pocketing cash.

With 40 around the corner both Pete and Debbie are worried that the marriage has lost the spice. They bicker over things little and big, know each other two well to proffer compliments and are so familiar that they lie casually lie each other and are unguarded at all times.

With stress encroaching from all sides personal, business and social, it doesn’t help that both Pete’s and Debbie’s dads are also around to create tension. Pete’s dad (Albert Brooks) is always borrowing money and has three unexpected triplets that he cannot even tell apart. Debbie’s dad (John Lithgow) has also just appeared on the scene after a long absence, he is wealthy, aloof and removed socially, something Debbie isn’t sure if she wants to change.

The movie deals with the usual foibles and sources of tension that each longtime couple must face at some point. The perils of ageing and constantly changing bodies, raising kids and dealing with colleagues, casual friends and extended families.

Where Knocked Up had a series of small roles all busting a gut to be noticed, This is 40 sensibly tones that aspect down, aside from one moment where Charlyne Yi’s character crossed the line into parody. Jason (Jason Segal) is back as Debbie’s personal trainer, Chris O’Dowd adds to his impressive and growing CV as one of Pete’s staff, and Melissa McCarthy takes her scene so far it moves through ‘awkward’ to ‘too far’ and bursts through to hilarious again.

The name cameos are also thankfully kept to a minimum, with a Green Day frontman being the only one I could recall, and it was mercifully brief.

Perhaps it is because I am perilously close to the age of Pete and Debbie, but I identified with much of what goes on in this film and laughed frequently, not ‘home run Bill Murray or Steve Martin’ belly laughs, but those unforced ‘hnnn’s, the laughs you weren’t expecting.

And while I loved the bits I identified with, I also loved the bits that I had no idea happened – and am now either looking forward to or dreading, mostly dreading…

Pete and Debbie share a great chemistry even when fighting, and even while both are at times malicious, unthinking and occasionally loathsome you can’t help but like them for the most part. The girls thankfully are given multi faceted parts and are more than just obnoxious or super-cute quote machines.

But Albert Brooks stole the show for me as Pete’s dad. Like he does in the Simpsons not a line is wasted, and his throwaway comments – often under someone else’s lines – are constant gems. At one stage he threw in a deadpan line that didn’t make me laugh and I openly wondered why, before returning 5 seconds later with the joke and laughing again.

As a comedy the primary job is to make me laugh. This is 40 made me laugh from the opening scenes, and kept making me laugh until the end.

Final Rating – 8.5 / 10. At two and a half hours this is a commitment for a couple, and be prepared for ‘that’s just what you say’ comments periodically. But if you want laughs look no further.

The bar for Best Comedy of 2013 has just been set.