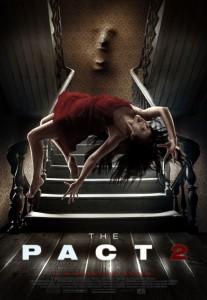 Grey in terms of the washed out tone that made the first film disconcerting and grim at times. But mostly grey in tone. Too many films go out of their way to explain themselves, The Pact was equal parts effective and confusing by refusing to spell things out. Sure when it ended I never fully ‘got it’, and even now I couldn’t begin to tell you what the point was, but those many unsettling sequences stay with me.

The good news off the bat is that The Pact 2 remains neither black nor white. Does that make it as good?

The film opens a week after the first film ends, with the discovery of a grisly, blood soaked murder scene, with a corpse minus a head. The police lieutenant fears it may be the work of a serial killer. They call in the FBI profiling expert Agent Ballard. Ballard in turn approaches a young woman named June for questioning. He informs her that she may be a target, which is initially news to her and her boyfriend, raw cop Daniel, who was on the crime scene only hours before and managed to draw the quiet ire of the steely-eyed and confrontational Ballard.

The film doesn’t rush to explain things, although being a sequel it does move into the meaty bits sooner. There are still the slow burn set pieces, which mostly take place as someone navigates a seemingly innocuous room, and more than a few jump scares (including a mirror scare, a door scare and a double dream!). But thankfully, like The Descent before it, The Pact 2 manages to pull off the cliches well, and plays to its strengths even better.

While it’s not spoileriffic to say Caity Lotz returns as Annie Barlow – her name is on the cover – her role here is not a dominating one. This is June’s story, and the few scenes that June and Annie appear in together are some of the best in the film.

Elsewhere the freaky blind girl from the first film returns for a short while, but it is Agent Ballard who steals most of the film’s best moments. Ballard manages to pose the question of whether the Judas Killer was not only the inspiration, but perhaps the reincarnated perpetrator of these new crimes, while making everyone else uneasy and even doubting their own innocence. His piercing stare and clipped speech make him appear the world’s most intimidating science teacher, despite his diminutive stature.

Explaining more of the plot wouldn’t be fair to the film and in any case would only end in more confusion, like asking if Stewie from Family Guy can be understood by adults or not – the end result doesn’t matter, so long as it works.

The Pact 2 works in all the ways that the first one did. It keeps the same low budget look, the same simple tone and the same hard to understand themes. But above all it has some genuinely unsettling moments. It was a bit like a scary Shane Carruth film, which I think we need more of.

Final Rating – 7.5 / 10. My pact with this franchise is; I’ll keep watching them until they mess up. Two for Two so far.