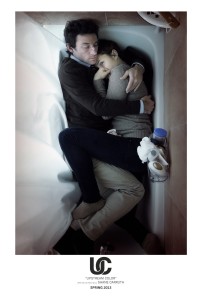 Many years ago Primer showed that writer / director / actor / etc Shane Carruth had a knack for making the confusing interesting. You didn’t understand what the hell was going on in his no-budget sci-fi story, but it sure was compelling. Another thing we couldn’t know at the time was if this was a fluke or something more, was Primer his Gangnam Style, or was Shane Carruth the cinematic equivalent of Bob Dylan, on often unintelligible genius.

Now many years later and with little fanfare comes Upstream Color, another odd and occasionally frustrating piece of work. Is it as good as Primer? Or better? I can’t tell with certainty – but like other dumb people I’ll just say ‘I don’t know art. But I know what I like.

And I like Upstream Color. If Shane Carruth is a snake oil salesman, well then Sir I need more snake oil…

Again taking the core from a sci-fi concept and the. Spinning it out into other directions, the film begins with a young woman named Kris being given a new serum derived from a special bug. In the interest of brevity the woman eventually meets a man named Jeff, and the two share a relationship that spans a long period of time.

That’s the core, but it’s really not what the movie is about. Like Primer, Upstream Color is all about tone and building momentum. Where Primer was cool and dispassionate, Upstream Color is warm and welcoming. Primer was shot under a blue lab light, with the background noise an insistent hum. Actually more a drone. Upstream Color on the other hand, seems to take its lighting source from warmer origins. Seedling lights seem apt, and the undercurrent of noise is more a dull crackling, like crickets in the distance.

And – even if you’re the type who demands to understand every nuance and interpret every subtext – that’s probably not where the sound of crickets will end. The film is wilfully disjointed. There are baffling edits that jump forward indeterminate periods of time, with no effort for audience exposition. You will hear no clarifying dialogue here, no-one to helpfully blurt out “of course thanks to your condition we now have to go to the doctor for alternative blah, blah” for no reason.

Even if you do catch up it likely won’t be for long. Another jump cut awaits to take the carrot once more just out of reach.

The effect of this is a dreamlike state for the film and in all likelihood you too. Your emotions may oscillate as the characters’ do. You may be frustrated. You may be annoyed. You will be confused. Depending of your desire to ‘get’ things you may be disgusted.
I don’t think anyone is meant to ‘get’ everything here. I think the intent is to send us on the elicit the same emotional journey that the characters undergo, to leave us woozy, suggestible and emotional. It works.

As human guinea pig Kris Amy Seimetz comes across as a mix of Naomi Watts and Noomi Rapace. Her emotional state grows increasingly fragile, as her personality is built and rebuilt through the film, sometimes by the drug, sometimes by others. Her instability fuels Jeff, and Shane Carruth plays him down the line. He wants so badly to help, to be trusted, to solve things, but isn’t immune to anger and frustration when these things prove impossible.

Upstream Color defies categorisation. It refuses to be understood and dares you to impose your own truths upon it. This is braver than Hollywood combined. More daring, creative and open to interpretation. And that’s why 137 people will ever see it.

That’s a shame. A Primer and Upstream Color double Bill will likely we viewed upon as classic in a few years. For that to happen Shane Carruth might first have to make the slightly more accessible film to capture the public’s attention. On the available evidence I think he has it in him.

Final Rating – 8 / 10. I could watch Upstream Color five more times and come up with five different theories and interpretations. And I just might.