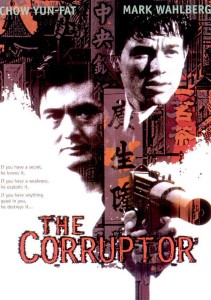 When Chinese crime gangs threaten to rip the New York streets apart, the only solution is to send in the photogenic white guy. Apparently.

Of course the police department’s Asian crime squad, lead by Nick Chan (Chow Yun Fat) resents the implication that they require ‘outside help’, which is rich when it seems the cops are doing just as much to boost the death toll as the bad guys.

What newcomer Dan Wallace (Mark Wahlberg) quickly comes to realise, is that the line between the sides is very blurry. Bad and good become indistinguishable when everyone is on an end of the give or the take. Corruption is rife, blind eyes are everywhere, and the only prevailing truth is that every few minutes we must pause to shoot a bunch of guys.

In a film that features a running subplot about the tragedy that is the abandoned bodies of young Asian prostitutes, the film neglects to discuss or justify the four or five occasions when in excess of ten humans are gunned down, often with civilian casualties. One chase sequence alone sees at minimum twenty deaths.

The cast is as confused as the plot. Wahlberg keeps a square jaw and a determined eyebrow throughout proceedings, as if he can singlehandedly make us believe it, while Chow Yun Fat over acts to near Nicolas Cage levels of manic energy.

Here is a film that purports to delve into the ethical dilemma of whether ‘it’s ok to be naughty just because everyone else is doing it’, but punctuates this serious drama with silly action sequences which bear no relationship with reality.

And is it bad that these action sequences are the best bits in the film?

Ultimately The Corruptor is a hard film to discuss objectively. The drama elements are as silly as the action elements, leading to a tug of war as to what to ignore. The stupid attempts at moralising, or the ludicrously implausible action sequences.

I chose, as always, to take the low road. The Corruptor is a film where there sometimes shoot lots of guys real good.

Final Rating – 6.5 / 10. Shoot ’em Up meets The Departed. But don’t let either of those references get you too excited.