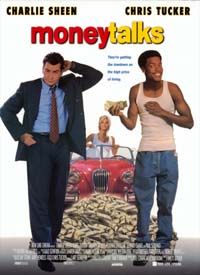 While I am sure I saw Money Talks before any of the Rush Hour trilogy, I did not remember just how much of this film ended up in the Jackie Chan trilogy.

Chan’s foil for those films, Chris Tucker, anchors this lesser film as Franklin, a small time ticket scalper up to his ears in debt and thrown in jail for his misdemeanours, only to escape on the heels of a very high profile South American crime boss.

Franklin teams with James (Charlie Sheen), a middling reporter battling to save his job.
Franklin is a motormouth of stupidity. An over confident and ill equipped man who tries to bluff his way into and out of every wrong situation he can. James on the other hand, is set whether he retains his reporting gig or not, thanks to his impending wedding to the daughter of an extremely wealthy businessman in Guy Cipriani (Paul Sorvino).

Of course in films nothing runs smooth. James must hide Franklin for the weekend until he can unleash his story in prime time, thereby most assuredly returning him to his former highly paid and respected role. The problem is that he daren’t inform fiancé Grace (Heather Locklear) and her family.

Except the wedding rehearsal is that very weekend, and the cops, the bad guys to whom Franklin owes money, and of course the real bad guys who want him dead, all close in upon them.

Yes it’s standard fare, but the familiar Tucker-tics will keep you engaged, even if only to tick them all off. He does the shrill yapping. The sentences that deflect his lies. The empty braggadocio. The bug eyed Michael Jackson impressions. The casual amiable racism. It’s all here, and if I hadn’t seen it all before in Rush Hour, it would be mostly amusing.

Chris Tucker has always been an eager to please teen placed in adult situations, trying to succeed in dangerous ways, as if there would be no penalty to being caught beyond a stern admonishment. His efforts almost always end in vain, or at least place him and anyone with him in peril, but they are usually entertaining.

The problem for Tucker – and us – is that we’ve seen them all before, and even though this film arrived before The Fifth Element and the Rush Hour films, I’d suggest you look those efforts up before this.

He’d obviously honed the shtick by that stage, and it wasn’t quite yet stale…