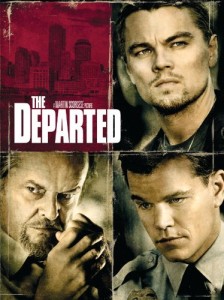 The Departed is intricately plotted, expertly realised and features a smaller cast as deep as any mainstream movie for many years.

I also hope that it is not at all realistic. This is because of the breathtaking level of corruption and betrayal on both sides of the thin blue line. While each sides have obvious good and bad guys that are at least true to label, they also have guys play acting a role, striving to give their colleagues an edge.

The action takes place in Boston, where it seems almost everyone is related regardless of which side of the law they reside.

The one genuine bad guy that runs the streets is Frank (Jack Nicholson), a local heavy with a loyal crew. Frank either runs every major crime operation or wants a cut. He even leans on the honest business owners and demands protections money.

It’s surprising when you consider just how labyrinthine and elaborate this all seems, that the core of the plot involves the sale of 20 stolen small microprocessors that can be used in deadly weapons and are worth millions. The good guys want the merchandise found and out of nefarious hands, Frank wants a clean sale and the big bucks that accompany the deal.

This is where it gets complicated. Billy (Leonardo DiCaprio) works for Frank, but he is really a cop gathering info until he has now enough to nail Frank and put him away for many years. Meanwhile on the other side of the tracks Frank is getting info from Colin Sullivan, a cop who filters some choice info back to Frank for him to use to his advantage.

If this wasn’t complicated enough eventually both ‘insiders / rats’ eventually learn of the existence of the other – just not their identity – so there is a big circular search going on on both sides to unveil the counterpart without having their own cover blown.

Let’s pause for a moment to let that all sink in. The Departed actually has more levels of corruption than I even dare let on, some of which provides the film with scenes of great tension, all with logical dilemmas lurking close behind.

Take for example one scene where the rats both learn vital info at the last second and have to pass it back to ‘their team’ as quickly as possible without attracting attention. Would a colleague asking everyone else loudly “Why am I just finding out about this now?” be just a little alarming? What about if that very same guy dragged out his mobile phone 4 seconds later to call his ‘Dad’, someone who is not mentioned at all elsewhere in the film?

With a handful of tense scenes, direction by Martin Scorcese and a cast featuring Martin Sheen, Mark Wahlberg, Alec Baldwin and Ray Winstone on top of the group already mentioned, it’s hard to point fingers at this film, which is an English language adaptation of the almost as good (and infinitely more straightforward Infernal Affairs). Buu-uuut; the more thought you put into the dense wall of coincidence, the more holes start appearing.

The Departed is above all entertaining and at times gripping. It is profane, violent and raw, perhaps a little overlong and undeniably logically deficient at times.

Final Rating – 8 / 10. The entertainment and class get it a high score, the convoluted plot – and demands that I shelve all common sense – keep it from Greatness.