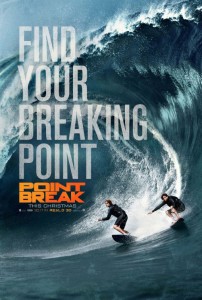 I often wonder how ‘extreme’ an incredibly well subsidised and carefully calculated sport can truly be.

The Point Break remake broadens the scope beyond the dumb fun Swayze/Reeves original’s surfing, but the only thing ‘extreme’ here is blandness.

Johnny Utah was way too extreme for the world of extreme sports, where he was one of the world’s most renowned ‘poly-athletes’. So he joined the FBI. And before you say “well it must be that easy” Johnny Utah has a carefully penned speech for you that tells you that it wasn’t…

On his first day on the job Utah learns of a bunch of Red Bull fuelled Robin Hood’s who commit crimes using death defying methods before giving away the ill gotten gains to the public. He instantly surmises that they are trying to perform the ‘Ozaki 8’, a series of incredible physical feats, the achievement of which will grant total inner peace.

Apparently. No-one has ever done it.

Delroy Lindo is the only FBI guy to believe in Utak Poh and his wacky theory. Ray Winstone is not a believer but he helps anyway, which is a good thing as it lends the middle section of the film someone with an actual personality.

The challenge for Johnny Utah is infiltrating award where tattooed men hurt themselves while tattooed hot girls watch on jiggling and screaming “woo!”. And it’s all sponsored by Gen Y friendly crap.

A challenge indeed. It takes one single wave… Utah wakes and he finds Bodhi, a steely eyed highly principled git who spews empty lines that belong on the inspirational memes adhered to the walls of many a human resources office. He and his gang of samey looking Eastern European morons tentatively embrace Utah from the get go. The gang’s primary groupie Samsara (Theresa Palmer) is less tentative, she gets straight to banging Utah with the tenacity of a Belieber.

There is so much more bonehead to come. After an underground fight club – how this forges inner peace is not explained – we move to mountains. The lads ascend mountains, then jump off them, then ride up down and across, before even exploding one.

The acting doesn’t help. All Lindo and Winstone do is highlight the lack of charisma everywhere else. I don’t know if the gritty surliness of Bodhi and co is marketable in a way that I could not see, but they were entirely forgettable. All Johnny Utah made me think is how a random Hemsworth would have been 600% better suited. Only Teresa Palmer makes an impression, but only in the way a total absence of care and/or skill can do. Maybe she plays to the quality of the surroundings, but she is terrible here.

Then, fifteen minutes plus of credits – broken only by a couple of Monster energy drink ads (not really) – and Point Break 2016 joins an increasing number of reboots that instantly kill potential franchises while simultaneously sullying the memory of the original films.