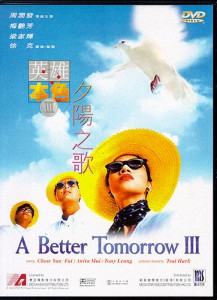 Now this is a prequel to the first film, so rather than ABT 3 I might have suggested they call it A Better Yesterday, but I wasn’t there at the time.

This time Woo is out and Tsui Hark is in the director’s chair, (leading to the worst film in the trilogy). Is it any wonder that Woo and Hark were once peers and that only one went on to direct internationally while the other stayed in Hong Kong making films? (In Tsui Hark’s defense Woo’s only real strength is action sequences, his films are otherwise no better or worse. But this IS an action film.)

At two hours long this drags mightily for quite a while, and the action is over the top without the Woo benefit of being dumbly entertaining. It is like Tsui Hark said I can’t promise you’ll enjoy it, so I’ll make it bloodier and more far fetched.

A young Mark (Chow Yun Fat) goes to Vietnam in 1974 at the tail end of the Vietnam war to meet his cousin Mun as he released from prison for being involved in the black market.

Mun only turned to crime to assist his ailing father to leave Vietnam and return to Hong Kong, but he got caught up in the wrong crowd and ended up in jail. So they decide to re-enter the crime world to get quick cash so that they can have another crack at leaving the country, taking Uncle/Dad with them.

Now I ask you what could go wrong?

Mark was only able to get through Vietnamese Customs with the assistance of an unknown woman, and she turns out to be their first contact in the Vietnamese crime underworld named Miss Chow.

After their first job together goes wrong and a bloodbath ensues, Miss Chow turns into a female Rambo and blows dozens of bad guys away, and Mun and Mark acquit themselves well enough that the three of them get along like a house on fire and spend all their time together.

Now that they have the cash to leave Vietnam they sell up and head off, again nothing goes smoothly and it is only thanks to Miss Chow that they get through, with Uncle nearly dying in the process.

Back in Hong Kong a love triangle quickly forms, Mark and Mun both have the hots for Miss Chow, but she only has eyes for one of them, and it wouldn’t be fair to say which here.

The boss immediately attempts to sever all of Miss Chow’s distractions by initially trying to kill them, and then ordering them to leave Hong Kong immediately.

Of course this is never going to wash, so we have a deranged finale with Mun, Mark and Miss Chow joining forces in a bloodbath that leaves dozens killed and involves tanks, machine guns, standoffs and switching allegiances. Basically everything that John Woo would have included, but in a manner so clumsy that for half the time I couldn’t work out what was going on, and for the rest I didn’t care.

Final Rating – 5.5 / 10. A disappointing end to what was hardly an awe-inspiring trilogy to begin with. They should have stopped at two.

I wouldn’t bother with any to be honest. Watch The Killer or Hardboiled instead, ignores the complicated rubbish and keeps all the good bits.