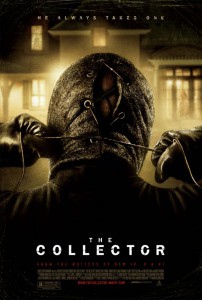 “No, not a Superhero movie at all!”

Fact: About half way through The Collector our hero (of sorts) finds a man trapped in a large trunk, chained and gagged. Upon un-gagging (de-gagging?) him the trapped man explains what we are facing: the bad guy “collects” people, he keeps those that he wants to, and kills those he is tired of. He then goes on to say that he is tied up and left in the box to be “bait”, and to draw more victims in.

Now that is a lot to take in when all you came here for is to rob the place, but given the fact that the person describing the situation has been tied and put in a box up by a masked guy who does not talk I must query the clarity and reasoning of the source.

I don’t know the answers, I just supply the questions.

Fact: The robber was at the home only hours previous, once he arrives he finds the home is booby trapped in every room and that there are various rooms apparently custom built for torturing and maintenance of victims.

In case you haven’t guessed I wasn’t a big fan of The Collector. It is a wannabe franchise featuring a supposedly new and fresh bad guy that the Saw kids will catch onto, with more than a dash of Hostel thrown in, but without one shred of intelligence or common sense to pull it all together.

The only fun to be had in the whole movie are the funbags on the chick who comes home to get boned on the table for no appropriate reason.

I realize that Tits n’ Ass + Gore = Entertainment to some people, and I am frequently one of those some people, but I would personally qualify that by adding “only if these things are used in an entertaining way”.

The Collector is a pointless and incredibly flawed way to justify a Saw + Hostel rip-off in a supposedly fresh and clever way.

Final Rating – 5 / 10. I just pray they don’t make The Collector 2, even though they went out of their way to set it up. I watch a lot of shitty horror movies, and what annoyed me most was how calculated this all felt. I would hate to think that the horror-watching public are dumb enough to fall for this.