Reign Over Me (Review) 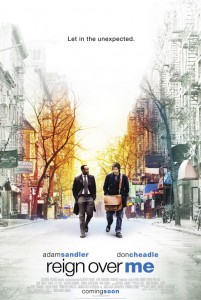 I recently watched Punch-Drunk Love and if you are interested you can see HERE that I didn’t much like it. The only reason I watched it in the first place is that I had been bombarded with so many crappy movies of late that I thought a smart drama might be a welcome change of pace, and PDL received almost uniformly positive reviews.

In short after I posted the PDL review I received a message from someone who agreed with my opinion of the movie (Yay!) and saying that Sandler was better in Reign Over Me, an underrated film from recent years.

In short they were absolutely right, as while Reign Over Me is a little heavy handed at times and I got a little tired of the characters repeatedly running into each other, it is a way better film and far more enjoyable than PDL.

Reign Over Me revolves around the relationship between two former friends who cross paths many years after they each left college.

Both were dentists by trade, Alan (Don Cheadle) still works in a high pressure practice that he personally built from small beginnings, and Charlie (Adam Sandler) is no longer practicing, or for that matter working after a life-altering event.

Now Alan is fully pussy-whipped, after working long stressful hours his entire “downtime” is spent doing what his wife (Jada Pinkett-Smith) and the kids tell him to do, including crosswords and other boring stuff. Like Paul Rudd in I Love You, Man he has no guy-friends to have a beer with or blow off steam.

Now I like Don Cheadle, I reckon he’s a great actor and probably a very nice guy, but he ain’t that handsome, and because his staff say it in the movie he is a straight up chick magnet dentist. In an early scene a hot recently single woman played by Saffron Burrows puts the hard word on him (“It would give me pleasure making you happy”) in his office, and after he knocks her back he is reminded that he seems to have that effect on many others. I just don’t see it…

That aside, after a chance meeting with Charlie the two start hanging out. After Alan reminds Charlie of their shared past Charlie seems pleased, if a little reluctant to reminisce over some old times, only any talk of certain topics sends Charlie into an instant rage.

Charlie is very much a Rain Man type, anything that he doesn’t want to hear sends him into an emotional tailspin and even when he is on an even keel he is quite robotic and awkward in social situations. Even his home seems to have been set up by a wealthy teenager more than a responsible adult, pride of place is a big screen TV and a Playstation that seems forever on and ready, there is a music room for jamming, and a massive collection of vinyl albums. (So maybe a 70s teen but whatever.)

Charlie even plays drums in a metal band to blow off steam, and fangs around the city on a motorized scooter.

Now it must be said that while Charlie is an introverted big kid, when the reasons behind his apparent withdrawal from society are fully explained it seems reasonable that he might choose to shelve his former life rather than deal with the grief.

I have since read that most critics make a big deal of the fact that 9/11 is the cause of his issues but I can’t see why, a car accident or similar might do the same thing and the film wouldn’t necessarily be any better or worse for it. To the defense of the film they at least don’t lean on 9/11 to create forced sympathy or sadness.

As the film is more about the relationship between Charlie and Alan it is redundant to simply explain the events that occur in the film. Alan gradually grows to realize why Charlie is as he is and decides to try to help him move on with his life, he ultimately approaches a psychiatrist played by Liv Tyler for assistance in getting through. (Alan’s wife grows more dissatisfied with the fact that Charlie and Alan spend what was previously family time together.)

Charlie on the other hand has chosen to deal with things by not dealing with them, which those around him simply can’t understand, as they think he doesn’t care about the events or his loss. When news of Alan’s father’s death arrives, Charlie would rather go out for Chinese food than discuss it or show sympathy, as he simply can’t deal with the concept of death any longer in a rational manner. In another example of his fragile grip of reality once Charlie admits his shortcoming in dealing with the situation he chooses to offer money as compensation rather than apologizing.

The real deal here is that Reign Over Me is a worthwhile film that handles relationships and how people choose to deal with adversity and loss. It is often not a happy movie although there are a few moments of levity and humour.

Towards the end of the film I had my fingers crossed that the filmmakers wouldn’t simply wrap everything up in a big happy bow to keep the audience content, and to their credit the (sort of ) didn’t.

Adam Sandler can act. There, I said it. Charlie’s character veers wildly throughout the film from introverted, to combative, to bewildering, and Sandler keeps you interested and believing to the very end, where unfortunately the Billy Madison / Little Nicky voice came out for one scene. (Probably not his fault, a guy can only have so many voices and it can’t be helped if one reminds me of a terrible film of his.)

Cheadle is the rock throughout, at times not understanding why Charlie goes off the deep end yet again, and seemingly oblivious to the fact that by spending so much time with him he is in danger of ignoring his own family. Again Cheadle makes it all plausible and holds the film together, as there must be a straight man to Sandler’s character.

As mentioned previously it was a little jarring to have all of the different characters simply “running into each other” so frequently through the film, but I can forgive that I guess. At the heart of Reign Over Me is the fact that it is a good movie, it is well acted and tells a good story worth watching.

I think if you want to pick holes you can do so with almost every film made, sometimes you are better to shut up and watch.

Final Rating – 7.5 / 10. Not the best film you’ll see this year. Just a worthwhile drama featuring the best performance Sandler is likely to have in his career.