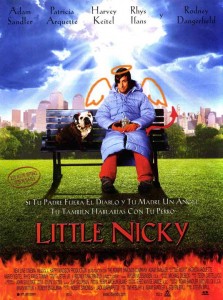 Truly (this film is) the spawn of Satan.

For some reason I thought Little Nicky was one of Adam Sandler’s precious few minor successes, even though I haven’t seen it in more than a decade.

Then a week ago I borrowed TOG’s copy and thought I might revisit Lil Nick to see how it held up.

Sandler plays the titular Nicky, the son of the Devil (Harvey Keitel), who after 10,000 years of running Hell is rapidly approaching the end of his term, a process that culminates with the naming of his successor for the next hundred centuries and performing such necessary day to day operations as forcefully combining Hitler with a pineapple…

And the nominees for ‘New Satan’ are: Nicky and his two brothers, both of whom are far more Devilish than the sweet, confused and well meaning Nicky, who would rather rock out solo in his room than lay waste to sinners.

This all changes when Nicky’s brothers crack the shits and head ‘upside’ to vent their spleens upon the defenceless Earthlings above. This unexpected ‘out through the in door’ causes Hell’s door to quite literally freeze over, which puts Daddy Devil in peril. With Dad’s life expectancy of only one week, Nicky is the only man left standing with the capability – however remote – to bring the brothers back and save Pop from doom.

Of course the ‘laughs’ are to be found in having residents of Hades dealing with the normal people. Nicky arrives to find that his brothers are wreaking havoc on society and influencing change all over, hoping to convert as many everyday folk into sinners so that they can rule ‘New Hell’ right in the middle of NYC. This device practically demands that we will see kids talking and acting like adults, old people being young and hip. And animals talking…

I normally abhor the fact that a talking animal is supposed to instantly be hilarious, but it’s hard to label it dubious in a film where the son of the Devil is trying to prevent hell from freezing over. Nicky teams with a friendly guide dog – not a seeing eye dog, a talking dog who actually talks and gives Nicky assistance and guidance with how to deal with the real world – and moves in with a friendly New Yorker who somehow becomes the justification for the numerous unfortunate gay jokes that besmirch the second hour of the film (and much of Sandler’s career).

Even though Little Nicky was made relatively early in Sandler’s career, his time on SNL provided him with enough connections to call in some favours and amass a huge name cast. On top of Keitel as the Devil (which should have been the film’s big win but ends up as a sad blot on Keitel’s resume), Rodney Dangerfield appears as Grandpa Devil, Quentin Tarantino cameos as a religious extremist, Regis and Henry Winkler both pop up and numerous SNL cast members – most notably Jon Lovitz – all take their turn in trying in vain to help Sandler to another hit.

Alas it all fails. I was almost ready to forgive the gay jokes, the rudimentary 90s CGI, the reliance on cute adults like kids and kids like adults rubbish that passes in lieu of carefully crafted jokes (Look kids, a rapping Grandma!), all the way until Rob Schneider stuck his pug-ugly undeserving head into proceedings to lazily grunt out what is allegedly his catch-phrase.

Final Rating – 5.5 / 10. Gee Sandler, even the films that I remembered fondly, happily, less negatively suck. Was this man ever funny? I am too scared to revisit Happy Gilmore anymore lest I find out the unfortunate truth.