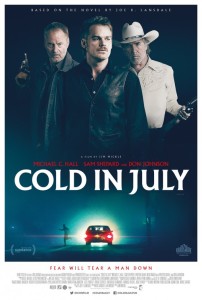 Where Blue Ruin zigs Cold in July zags. Both films are low key, low budget, gritty and worth your time, but Cold in July makes a couple of key decisions that betray a desire for attention. Ultimately this departure of tone is what keeps it the lesser of the two under-seen family crime gems from 2014.

When Richard surprises a burglar in his home, the astonishment of both parties is palpable, in the eyes of the balaclava’d burglar, and in the accidental trigger finger impulse of Richard. The incident leaves the burglar dead and Richard the talk of the town, something that he instantly regrets as he tries in vain to expunge the unpleasantness from his memory.

The burglar however, a young man with a lengthy record, is not missed. No-one grieves or regrets the life lost, in fact some surmise that he ‘got what was coming to him’. When Richard watches the funeral from afar he sees it is sparsely attended, only a few cemetery attendants… and the victim’s bitter and recently paroled father Ben, who not only confronts Richard, but issues a few extremely thinly veiled threats aimed at he and his family.

In the days and nights that follow, there is little subtlety on either side. Richard confronts the police and is summarily told ‘get over yourself’, and Ben casually tosses about warnings and reminders of his intentions.

A couple twists later and the film takes an even more dramatic turn, with elements of Shotgun Stories and even 8MM.

Don Johnson shows up as a part time private investigator, part time pig farmer, and the tone of the film grows even more dark, with a web of lies and dark secrets uncovered which seem to necessitate extreme action.

Unfortunately with the plot turn and the arrival of larger than life characters (Johnson chews the scenery like he’s in a Tarantino film), come pot holes that require too much random luck and/or audience stupidity to overcome. The film is mostly well acted and well paced though, featuring the ‘so hot right now’ 80s retro themed production, costuming and music.

Speaking of the 70s and 80s, the Journey is ultimately worth it as the good bits outweigh the bad, and Cold in July is an enjoyable, albeit slightly sloppy, everyman crime thriller.