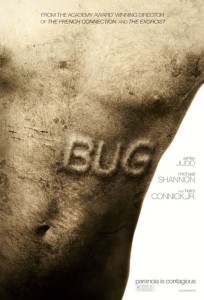 Agnes (Ashley Judd) is a damaged soul. Broken by a past relationship with the wrong man and nervous at the news that he has been released from two years in prison. Agnes doesn’t so much party as revel in her own sorrows with drugs and alcohol and her skanky but loyal friend RC.

It is through RC that Agnes meets Peter (Michael Shannon), although she less meets or picks up, than inherits, as he is the only man left once all else have retired for the night. Peter talks in a somber monotone in staccato sentences that alternate between timid, unsettling and intriguing. Everything is unfiltered. He is stilted, uptight and socially awkward, but with no visible tattoos and a total complement of original limbs. And once newly paroled Jerry (Harry Connick Jr.) reappears, Peter suddenly seems harmless enough for at least one one night.

It is Peter that first spies the bugs in the morning. So small that Agnes has to squint hard to see them, she doubts that they present any danger whatsoever, until the marks appear on his belly.

With confidence built through a lack of cynicism and refusal, Peter suddenly opens up about his past, how he came to be at this location, and why he is reluctant for anyone else to divulge his presence to others.

Bound together by the fear of the outside and the strength of combined paranoia, Peter and Agnes find comfort in each other, and jointly set about shutting out the outside world.

Bug takes place in one primary location and with a small cast. It is quite obviously written as a stage play, and Judd and Shannon act the shit out of the material, throwing their bodies and sanity about with abandon. Shannon especially is a ball of intensity, though Judd nearly matches him as the story progresses.

As a work of cinema Bug has merit. The script is tight and the acting excellent. Whether the material is gripping or entertaining is a matter for others to judge for themselves, but as a portrait of paranoia and the power of persuasion, this film can hold its head high.