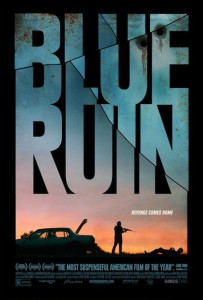 Dwight (Macon Blair) is a scruffy homeless looking guy. The kind of guy that would sip from the same dirty cardboard coffee cup for the entire day and would stub the cigarette down carefully just so he could finish it later. If you passed by him on the street you’d hastily formulate a plan to walk just near enough to not seem afraid, but just far enough so that he couldn’t reach out and grab you – just in case.

When he is unceremoniously roused from sleep to be given unexpected news, Dwight immediately gains momentary clarity. After gathering his thoughts he sets off on a hastily devised – and ultimately ill thought out – plan. Actually, less of a plan, more of a confrontation.

While the film does indeed kick off with an act of great significance, once again it is but another link in a chain of violence that continues to unfold, with Dwight seemingly powerless to escape.

Blue Ruin shows the reality of real ‘non-movie’ violence, how even the willing and more able can mess things up, and more importantly how the everyday person would react when driven to act against their nature, then forced to deal with the inevitable repercussions.

Above all Blue Ruin seems to paint a more realistic view of how everyday violence works, going far beyond the Hollywood ‘it’s just a scratch, let’s go!’ cliché.

Plans don’t always work. Hasty scheming is often deeply flawed and rarely pans out the way it did in one’s head. Life is not a video game. Everyone acts differently and unpredictably when things get intense. Especially when the situation is not even remotely similar to anything they have ever experienced.

Conflict brings stress. Regardless of the intent of ability of the aggressor, it is how they cope with the stress that determines their effectiveness. Films like Jarhead and Full Metal Jacket show how individuals can be numbed into ignoring or pushing through stress. We everyday scrubs have no such training. For all his desire, Dwight doesn’t seem to have much training of any sort.

Pain hurts. Often for far more than five minutes. Definitely for more than a couple pages of script. Especially when it is penetrative and debilitating. A gunshot wound or arrow cannot be shrugged off, nor does the effect wear off after a quick walk. If anything it gets worse without treatment.

Desire and good intention aren’t enough. A lot of shallow graves are filled with the well meaning but unprepared.

Dwight is the most ill-prepared and reluctant perpetrator of vengeance on film, which is why you don’t so much root for him as worry about him, especially in the long and suspenseful scenes where he hides in a panic, letting the camera show all of the uncertainty and stress that envelops him and clouds his mind. As such he seems the most unlikely ‘hero’ on film. Not to be mean but Macon Blair he is also one of the least likely stars I can remember. Yet you side with Dwight from the outset and throughout the film, especially once we realise just how far out of his depth he is.

Blue Ruin is a film like Shotgun Stories before it, a stark and realistic examination of what violence can do to a family and community, but while the characters in Shotgun Stories at least had some street smarts and capabilities, our dishevelled Dwight has no such qualifications.

This is a film about the aftermath of wrongful death. This is the film about how someone armed with only hatred and desperation, and none of the normal skills that you would think someone looking to wreak havoc would require, would act.

This is the version of what a real person might do, and it is all the more compelling for it.

Final Rating – 7.5 / 10. Not everyone is cut out to be the Equaliser or the Punisher, but sometimes life grabs a random guy and demands that he play the part.