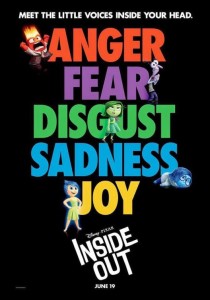 Pixar is back and here to tell parents that it really isn’t your child’s fault when they get tired or emotional. No, in fact the voices in our head are really tiny personifications in our head. They are Joy, Sadness, Fear, Anger and Disgust, all have their own name appropriate characteristics and traits, all attempt to help guide their ‘host human’ to a suitable emotional response to the situation.

As with all children, Joy is most prevalent, but interspersed with moments of all of the other primary emotions. The ‘inside’ team find it a good day when the overall tone is one of happiness, especially Joy, the dominant and eternally positive personality in the team.

Fear, Anger and Disgust have important roles in ensuring the child recognises danger and stays away from Crocs footwear, and Sadness wants to stay away but can’t help occasionally getting involved.

This five being crew is aboard Riley, a young preteen girl. Keeping Riley happy has never been a problem, but now she and her parents have moved from the lush greens of Minnesota to the dull concrete greys of the big city. Riley misses her friends, school and sports, and her parents have too many problems of their own to spend the time in getting her acclimatised.

Joy is finding it harder to maintain pole position in the crew, And when she and Sadness are accidentally cast out of the control room with no obvious means of return, the lesser used, not ready for prime time emotions. These emotions seem to provide more distraction than direction, and without the two extremes, a life of uniform blandness and a potential emo future awaits – unless Joy and Sadness find a way to return to prominence.

Much of the film takes place in Riley’s memory banks, where Joy and Sadness must navigate their way back to the core without befalling the same fate as faded memories. They are aided and abetted by Riley’s former imaginary friend Bing-bong, long since forgotten by Riley, but still present and hoping fervently to one day once again be required.

It should be expected that a film about emotions gets emotional, but perhaps not to the extent shown here. There is one pivotal moment that had both my wife and son tearing up, while I had a sudden and temporary case of hay fever that assaulted my eyes…

Inside Out is creative and built upon an intriguing premise, but I don’t see the world beater others claim it to be. It lacks the spark and memorable characters to join the lofty upper echelons of the Pixar stable. In fact, I’d have it around the mark of A Bug’s Life and Brave at this stage… Very good films yes, but not Great.

Final Rating – 8 / 10. It takes experiences of all kinds to build a child’s emotional base. Inside Out teaches us that there is room for all emotions and value in every memory.