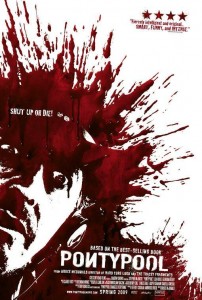 Terrible name. Half a great movie.

Is it fair to review half a movie? Or to recommend that you turn the DVD player off after a certain duration of running time?

I ask because I am torn here after watching the little-known Pontypool, a film that could have been amazingly effective but ended up disappointing, despite the pass mark I ultimately chose to give it.

Anyone who loves the horror genre knows that at least 2/3 of horror films suck arse, it’s just a fact. You need to watch 5 films to see a decent one, and perhaps 20 to watch a great film, this means that anyone sifting through will waste many hours watching sub-par stuff, it’s just what is required.

Example? By my rough numbers I have reviewed over 50 horror films since I started writing on this site, to date I would only call three “Great” horror movies, and that is if I am generous enough to include Blade 2 as a horror movie in the first place, (ordinarily I wouldn’t but I can see the argument). The other two being The Thing and Session 9. I have seen a lot more than that of course, just haven’t reviewed them yet.

So when you are watching a film and the hairs stand up on the back of your neck and you realize, “Hang on, this is pretty good. They’re actually taking this seriously and I reckon this is going somewhere”, anticipation inevitably builds, because this just might be one film that you can wholeheartedly recommend to your mates, even the casual horror fan.

Halfway through Pontypool was exactly that, an extremely successful exercise in building tension and putting the audience on-edge through the unseen. You didn’t know what was happening but you knew eventually it would all come into focus and that this could be great.

Then it all went for practically nothing with a hokey plot device and my pet hate: the attempted justification for whatever is causing the scares in the first place.

Pity, because at one point this was building to something “all-time list” good.

After a brief but oddly off-putting intro over the credits, the film proper starts innocuously enough. A guy wearing a big black cowboy hat is driving along through a snowstorm in pitch black darkness arguing on the phone, he throws down the mobile in disgust and when it starts ringing again he must stop the car in order to retrieve it without running off the road.

It is when he is momentarily parked on the verge that a well dressed woman appears and starts rapping on his passenger window, the man opens the window enough to hear her talking to him, though while she is speaking in English none of what she says makes any sense, and with that she backs away and more or less vanishes into the night.

A little shaken the man continues on and ends up at what we find is his workplace, a local radio station.

The gent is named Grant Mazzy, and he is the local early morning DJ, best described as the deep gravelly voiced guy with an opinion on everything, he feels a little out of place in a backwoods country Canadian town (the titular Pontypool) and seems to draw more than a little pleasure from winding up the producer of his AM show, a woman named Sydney. The third member of the early morning crew is the receptionist / technical expert, a young woman named Laurel Ann.

This particular morning, early traffic stop aside, starts typically enough, with small town news stories and some long and rambling monologues from Mazzy, however over the news wire comes a news story that seems important enough to interrupt the running sheet to broadcast live.

It seemed that the normally sleepy town had an eventful period, with local police reporting a disturbance involving local residents. When Mazzy makes light of the situation and insinuates that all involve were likely quite intoxicated Sydneytakes offence, while indicating that this was very likely the case and is therefore more depressing than amusing, as it affected real lives.

The local “eye in the sky” Ken, (actually a guy parked in on a hill watching the town through binoculars playing helicopter SFX) calls in to report further disruption in the town, this time far more serious. His concerned tone becomes more passionate and almost hysterical as he describes in some detail graphic violence and disturbing events as they apparently play out before him.

As the allegations are not yet verified or proven Mazzy takes the claims with a pinch of salt and describes “unrest as several people lay siege to the local Doctor’s surgery).

While the production “team” go about trying to clarify the situation and bring some logic to these seemingly irrational proceedings, some light relief arrives in the form of a local choir in support of a show that starts soon. Numbering about 6 and in full fancy Arabian costume (Why? It’s radio guys!) they go through the motions and sing their number to the obvious disdain of Mazzy, who has a hunch that the bigger story is outside. At the conclusion of the performance a young girl starts babbling nonsensical gibberish with such conviction, ending her impromptu plea for committal with a sound repeated over and over again for what seemed like minutes, (but was only a period of seconds).

Kooky huh? At this stage none of the three staff shared that view.

Further reports and calls come into the station that seem equally serious and implausible, if thinking rationally and not in horror movie terms that is, and there is a sense of genuine unease in the isolated radio station studio.

(Also from about the 10 minute mark through the one hour mark as events unfold, Pontypool is genuinely creepy at times and always interesting.)

Further calls, more disgusting and macabre reports and a reported death toll rising rapidly, and Mazzy wants out, what he initially treated with a mixture of bemusement and disdain has turned far more extreme, and in a knee-jerk reaction he decides that he is the victim of a sadistic practical joke that he wants nothing to do with. He walks out of the studio and into the freezing outside air, followed by Sydney and Laurel Ann, where he witnesses first hand that this is not a hoax, (or an immensely elaborate one).

It is worth mentioning that aside from Mazzy’s initial drive to the radio station all the events to this stage occurred within the studio. Everything described, including several of the most horrifying elements are never seen, simply accounts given over the phone to the station.

For some reason this is more unnerving than seeing the events themselves, as some of them would be extremely hard to carry out even with CGI and the likely results would be more laughable than shocking. Needless to say as I waited to see where the film was going my level of unease grew steadily.

(There is only one scene shown involving any blood or violence in Pontypool, and even that could hardly be called gore.)

Ken calls in periodically and each time his descriptions are more disturbing and his tone more frantic, understandably so given his first-hand accounts. It seems that the normally quiet town has been quarantined while the cause of the unrest is ascertained.

More off-putting are the instructions given to the survivors “Limit communication, especially affection, and try not to speak English”.

While in writing this may not sound too wierd, check out this for a soundbite from  only a bit later “They need a friend to suicide into”, imagine the possibilities of what that might actually mean!

This is about the time Pontypool goes off the rails. The spoiler free version has a new character introduced to the plot, and he has a theory that rapidly grows into what he believes is the cause of the outbreak. It is the cause that initially seems ludicrous, and then as the movie clumsily grinds to a halt in sensationally awful fashion it becomes even more preposterous and annoying.

To be truthful this movie would have been at least an 8 / 10 if the filmmakers and writers just decided to ignore any cause and just allow the survivors to that point to either escape or die in Hollywood cookie-cutter fashion, such was the strength of the first hour.

By over-reaching and introducing such an obviously far fetched and basically dumb premise into the film they left themselves with nowhere to go but to keep following the stupid plotline to the inevitably disappointing conclusion.

I am rambling now but only because this was such an opportunity wasted, the chance to make a memorable, unique and potentially classic horror movie doesn’t come around too much and in this case a clumsy 30 minutes blew that opportunity.

I’ve decided that filmmakers need to take a risk in order to make something great. The first hour of Pontypool earned an 8.5 rating, but the last third unfortunately missed the mark.

Final Rating – 7 / 10. Despite the hokey ending the first hour or so is first class. I give this film a B and hope that the next film this director makes builds on this promise.