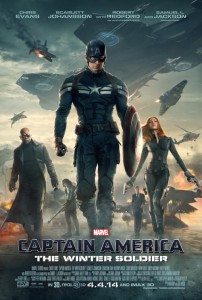 Given that Captain America / Steve Rogers (Chris Evans) was frozen for the better part of six decades before once again being added to US National Security in time for The Avengers’ Assembly a couple years ago, it’s ironic that he (and Black Widow / Natasha Romanoff (Scarlett Johannson)) are part of a special ops team that is essentially ‘kept on ice’ until times require intervention.

Even as a pre-super skinny youth, Steve Rogers lived a life full of ideals with a rock-solid ethical underpinning. That film was an unexpected success. He awakens in a world where the enemies are less obvious and the misdeeds more subtle. Where black and white aren’t so far apart. A world where high-ups on both side make decisions that hurt little people, and justify it with big picture stats and confusing jargon.

It was a long, long time ago in actual years, but Steve remembers when he was a little person being pushed around and marginalised.

Having once defeated Hydra, the most evil sub-arm of the Nazi forces, and more recently Loki’s hordes from outer space, Rogers is relegated to spending his days running laps and awaiting the call. Thankfully he has lots to catch up on since his extremely long slumber.

But much needed learning about iPhones, Biebers and #YOLOs is again shelved upon the news that the S.H.I.E.L.D. (only time I’m using the full goofy acronym) technology and security has been compromised, leaving identities exposed and vulnerable, and Nick Fury (Samuel L Jackson) dead on the operating table after he is attacked by the mysterious Winter Soldier, a masked and metal-armed Trent Reznor lookalike super-soldier playing for the other side.

Even while on the back foot, Rogers sees the bright side. With no technology to rely on all the fancy databases and high tech gadgets mean nothing. Time to turn to the old ways…

The struggle ultimately comes down to the difference between being ‘pro-active’ and ‘protective’, and the fundamental but important disparity in the potential outcomes of each course of action.

Despite being in the same universe Captain America has more similarities to Jason Bourne than Tony Stark / Iron Man. Though the action heats up and the explosions and gunfire return (a firefight that takes place under an overpass is especially visceral), Rogers and his rigid principles remain at the forefront of every decision, and his demeanour remains deadly serious throughout.

This time around the action is far less cartoony and as a result the body count is actually far higher than your average Marvel flick. Though Steve Rogers never directly kills anyone himself, and his amazing shield seems to know just how to react when thrown about in battle; should it bounce, deflect, embed or ricochet? No-one but this incredible shield seems to know…

With Black Widow (friend-zone only) and an eager and patriotic Sam Wilson (Anthony Mackie) the only people that Rogers can trust (where are the Hulk, Iron Man, even Hawkeye?) the few, the proud, the brave must find a way to uncover who is ultimately responsible for the security breach, what no doubt dastardly plan they are hiding, and just who or what is this Winter Soldier guy?

Even with the dry quip free nature of Steve (ain’t a damn thing funny about freedom!) Rogers, I found myself enjoying Cap USA 2 more than I expected. If there is an issue it is again similar to that the Bourne series faces, specifically while you are watching you are able to enjoy, but after the fact the action and dialogue are so straightforward that there is little memory of any hooks, notable sequences or so called ‘kick-ass’ scenes.

It’s just a well made action flick set in the Marvel universe. Another one. Another Large Scale one. And while it does actually further this world more than perhaps any film this side of Avengers: Assemble, it still almost comes across as filler. (It still kicks crap out of the awful Thor 2.) A stop-gap until they assemble once more or until Rogers and co are thawed out once again to protect us.

It’s easy for me to be blasé about this, but then also consider this; since Iron Man kicked off the solo-projects for the Avengers in 2008, we have had nine films and counting (Guardians of the Galaxy in August 2014 is next), with only Thor 2 being less than worthwhile.

Final Rating – 7.5 / 10. With two headlining roles in successful spin-off films under his belt, maybe Mr Rogers will relax a little. Somehow I doubt it.