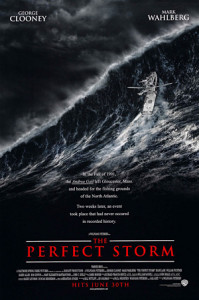 As shows like The Deadliest Catch take great pains to illustrate, the life of the professional deep sea fisherman is often a dangerous one. When Billy (George Clooney) and his crew venture into unfamiliar waters seeking one last bounty in a season of slim pickings, the stakes are high, the days long and the beards lustrous.

In the early goings fishing looks like the funnest thing ever. Which actually dovetails into my recollections of it; initially amusing and exciting, but rapidly degenerating into boredom and calls of ‘are we done yet?’.

With occasional rogue waves, men overboard, shark nibbles and constant infighting among the crew, the tension could be cut with a knife. In fact with all the bloodshed that seems to go into every tin not rejected by John West, you could be forgiven for referring to this film as Blood Tuna.

And if all of the above didn’t dampen the spirits of Billy and the boys, the imminent arrival of a massive storm probably will. If this was an episode of The Deadliest Catch, it would be the finale…

Some try to warn in advance. Some try to help once it is impossible to avoid. The Loved Ones ashore assemble in the local pub and await news.

The special effects are pretty great and convincing for the early 2000s, the performances all fine, which you would expect given cast including Mark Wahlberg, John C Reilly, William Fichtner, John Hawkes and Allen Payne. Only the *ahem* ‘overblown’ musical score and a few of Billy’s decisions leave cause for alarm.

In a film such as this the only thing to do is make the crew’s predicament become more and more impossible. In that regard The Perfect Storm excels. It is always dramatic and will keep you gasping as circumstances conspire against the fishermen.

There’s not much more to say really. As the title and poster suggest the small fishing vessel is pummelled by huge winds and incessant waves that threaten to capsize the boat and end the trip on a downer. I mean one big wave is bad enough. Here there are thousands, all pounding away incessantly like John Holmes after a massive coke binge.