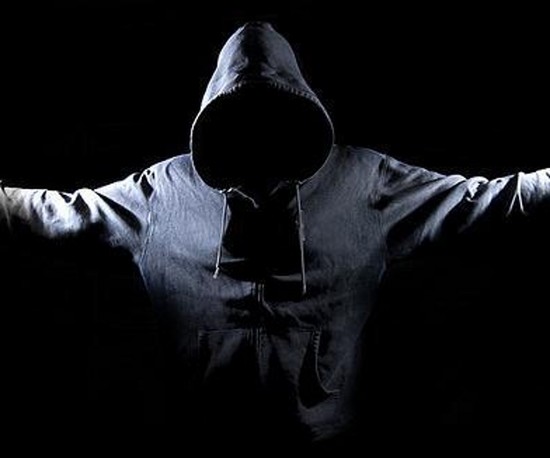 Hollow Man: Noun = Someone who is invisible. But apparently The Invisible Man is boring, played out, passé… 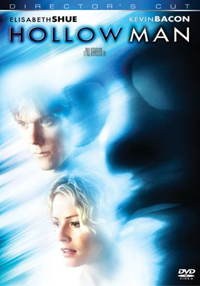 Here is a film that is largely set in a scientific facility, but you would be hard pressed to find a scientist that could form all the ridiculousness and inanity into a coherent equation – certainly not one that generates entertainment or quality as an output.

Sebastian (Kevin Bacon) is a scientician type in charge of invisibilising things. He and his ‘crack’ team that includes his ex-girlfriend Linda (Elizabeth Shue) and Matthew the lead assistant who is doing Linda, unbeknownst to Sebastian.

So when you invisibilise something you need a test subject. Because of course you do. Why Sebastian and co thought a large muscular gorilla might be the right test subject I have no idea. Surely the collective IQ of the room might have come up with some issues? I mean hasn’t anyone ever heard of a hamster? 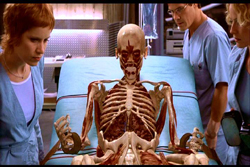 So once you’ve (not really) master gorill-invisibilisation, the next illogical step is to rush into something else…

… don’t shuffle uncomfortably. We all know Sebastian is going to nominate himself!

The real question is; how does an obviously incredibly intelligent and very healthy young man handle life once he finds himself as transparent as a middle income earner at a cheerleader party? You perve on women and play silly buggers with people that can’t see you. Of course you do. Because confident, handsome young wealthy geniuses who look like Kevin Bacon and drive new Porsches can only check out pretty ladies when no-one is looking.

But it gets worse. For all of us.

When the deinvisibilising (revisibilising?) fails, Sebastian grows irritable and toey, especially when told to remain at the facility. Now he knows how the gorilla feels? But where the monkey merely got angrier, Sebastian grows rapidly creepier, and ultimately (and unfortunately) rape-ier. And with that, the film devolves into your standard ‘where is he? Let’s get him.’ B movie spiral of ineptitude.

A see-through-slasher vs potential survivors.

The problems here isn’t see through. It lies squarely at the feet of director Paul Verhoeven, he of Total Recall, Robocop, Basic Instinct and *COUGH* Starship Troopers fame. Based upon his previous films and proclivity for unisex washing facilities, I can only believe that Sebastian does just what Verhoeven himself would do. He is after all, the man who gifted the world the three-titted hooker and convinced Sharon Stone that the camera would be on her ‘acting face’ while she crossed her legs.

But Verhoeven needs BIG material to work with; Mars is Big. A cyborg cop in a run down world is Big. Intergalactic space bugs are Big. Sharon Stone crossing her legs was Big (for any teenage boy).

A science guy who you can see through isn’t so Big. Perving on women in the shower and toilet isn’t Big. Beating innocent people who can’t see you or defend themselves isn’t Big. Being able to make oneself invisible and using said ability as a six year old boy would isn’t Big. It’s Wrong.

Hollow Man wasted a decent cast and some decent (for 2000) special effects sequences to become a schlocky B grade hack n slash made by a peeping tom.

Final Rating – 5 / 10. There are worse films out there. But not too many that cost this much to make. 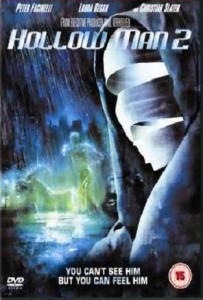 …Previously, on ‘I ain’t no Holler Man girrrrlllll’.

Scientists invent a way to become invisible. And use it to be abhorrent.

This time around there are two guys that are initially invisible. Double the invisibility. Five times the confusion. Half the (already threadbare) logic.

A cop and a scientist go looking for both the invisibles. Or one of them. We on the other hand fumble at the remote in search of escape and entertainment.

Hollow Man 2 is confusing indeed. The first thirty minutes or so consisted of people looking confused while things around them in the room moved a bit. Or maybe my TV was actually off and that was my reflection?

But I’m pretty sure I wasn’t responsible for all the banal and charisma free dialogue. I wasn’t an innocent bystander looking curiously and doing nothing about the woman seemingly floating through a corridor screaming ‘Help!’

I certainly wasn’t the one who suggested that the creepiness and insanity be replaced with an incoherent plot, a cast of nobodies and a budget of $17. I mean there aren’t even any invisibilising or deinvisibilising sequences – AKA the only bits that made Hollow Man momentarily interesting. Instead just the rapid fading away of Christian Slater’s career. And if he really insists on becoming invisible to the public, then he should agree to reappear in Hollow Man 3.

Final Rating – 4 / 10. The answer to the eternal conundrum: ‘how to make a follow up with no money to do it effectively?’ is ‘Very Badly’.