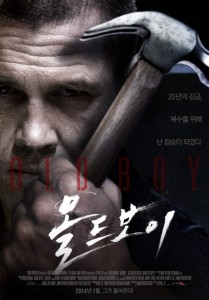 The original Oldboy is a landmark in world cinema, a brilliantly crafted film with countless memorable moments and a shocking sting in the tail.

I’ll fast track the exposition as it is largely the same premise. Joe Doucett (Josh Brolin) is a bad employee, a bad husband and a bad man. Actually he’s not much of a human being. So when he is abruptly plucked from the street and locked away with no explanation it is less of a case of ‘why’ as it is ‘which reason’?

Meanwhile outside, no-one mourns the vanished.

Imprisonment in this non-government sanctioned facility spans many years. almost 20 in fact. During this time Joe eats the same meal, sits in the same room and watches the same TV. Don’t know what the whinge is really; sounds like me from ages 18 to 38…

Finally, fresh air. As abruptly as he was taken from the streets, Joe awakens to find himself once again a free man. Albeit one who hasn’t touched so much as a blade of grass since Vanilla Ice was relevant.

And this is where you can almost hear Spike Lee saying “Yada, yada. Let’s not worry about the details from now. Everyone knows how it ends anyway”. Probably during a time out in another Knicks loss.

Within hours Joe has beat up several high school football players, mastered the iPhone and found a young woman, a ‘lover of lost causes’ to act as his New World chaperone, an ex-junkie in curious tow. After finding his bearings Joe decides he will find out who is responsible for his lost 20 years, and why they felt the need.

‘Spike Lee’ destroys presents Oldboy 2014 brings nothing new to the table, beside a finale that goes a further step (too far), and some heavy handed and clumsy segues that spell out far more than the masterful Korean film ever did. It’s simply not as rewarding as a viewer to be handed everything on silver dialogue heavy platter. Easier, but not rewarding.

You can’t be sure if Spike opted to dumb it down for a new audience, or if he simply knows no other way.

Elsewhere Sharlto Copley and Samuel L Jackson pop up full of piss and vinegar to try to bring a new bent on familiar characters (Copley in particular goes full blown camp in his portrayal of a complicated bad guy), only to both be drowned out by the sounds of viewer apathy. And the hallway-hammering scene is more reminiscent of Jackie Chan melees than the original scene stealing effort. (Credit where credit is due, it’s not bad though.)

I loathed the David Fincher helmed Girl with the Dragon Tattoo for simply being a darker version of the same film in a more familiar language. I should lament the same missteps here, although they at least tried (and failed) to bring something new to the ending. Given the CVs though you would have to think Fincher’s the more egregious failure, after all when did Spike last make a good film?

Better and more apt to say that both films stink.

Final Rating – 5 / 10. I honestly don’t know. Is it such a bad film or more a disappointment that one of my faves has been ‘Spiked’? Either way watch the original – every time.