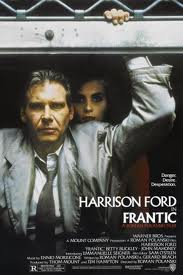 When a renowned doctor and his wife visit France for a conference, a luggage mix-up discovered after they have checked in to their plush hotel seems like the only downside to a romantic working holiday.

But before Dr Richard Walker (Harrison Ford) can even pause to think about how they might find their own suitcase and return the wrong one in their possession, his wife Sondra abruptly goes missing.

No clue. No explanation. No note. Just gone.

When waiting doesn’t work, Walker leaves the hotel room and begins the unfamiliar process of finding a person in a foreign land with minimal clues and no obvious starting point.

The strength of Frantic is that we only see what Walker sees. There are no cutaways to a captive Sondra, no mysterious figures watching on from the shadows, and most importantly no cryptic messages or miraculous discoveries. We are as puzzled and oblivious to the truth as this man searching desperately for his missing wife. With precious little help and sympathy from the French Police, Walker must go out of his comfort zone to further his search.

Walker doesn’t always operate alone. After a while Walker meets beautiful French girl Michelle, and the two team up for a time to help each other. Michelle is rash and a little naive, and with her goals differing from Walker’s at times, she is occasionally as big an impediment as she is a help. But she sure is purty.

The title Frantic refers more to Walker’s state of mind than the action. For the most part this film is hardly action packed. But by deliberately withholding information it is always interesting, especially as the truth is so very hard to predict anyway.

The acting is also good. Ford is clearly in his safe zone as Walker, needing only look perpetually concerned and frustrated in a role that is essentially “Give me back my wife”.
Frantic arrived after Witness and The Mosquito Coast and is better than both by far, without the gimmicky use of the Amish in Witness, and the obnoxious central character of the latter.

Final Rating – 7.5 / 10. This is a classy drama that demands and rewards your attention, and might be Harrison Ford’s best non-franchise effort.