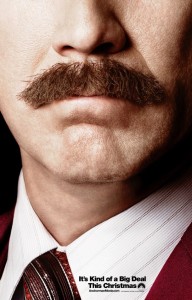 So a certain wife says “Oh come on. We never watch anything together…”

That was two nights ago. Not coincidentally the same night that I solemnly vowed to eat better, to exercise more, to take whatever supplements that I can find. I need to be stronger and more energetic, more passionate, more zestful for longer.

All so that I might summon more energy with which to hate this film.

My sole goal now is to life as long a life as I can. My life expectancy says I might barely crack 80 something. Hmmmpph ‘statistics’. With clean living and daily meditation I figure I can push that up a decade or so. That’s 10 more years of hating this film. (And my meditation will be an all knowing stream of “Ommmmm Anchorman 2 sucksssss”.)

Gone are the unnecessary trappings and distractions of modern life. I will not be dictated to by a society that refuses to share my disdain. Listening to music? Gone! Fantasy football? Yer outta here. TV? Phhhh please. More movies? Different, non-Anchorman 2 movies? No sir. I can’t have any even semi-decent film diluting the pure hatred that I have carefully and deliberately summoned for the sequel to the most unfairly beloved film of the last 10 years.

Prior to two days ago I foolishly thought that having a seven year old child was a stressful, frustrating, expensive and ultimately pointless exercise. Now there is finally a purpose. I now have something to pass on. Something that I must embed into his fragile little psyche. Oh yes little ‘Whatsisname’, I have much to teach you. Well only one thing actually.

What’s that unrented DVD cover? You say there are over 700 jokes in the second version deemed unworthy to find themselves in the finished film I was foolish enough to borrow? Well which of the  twelve – and that’s being exceedingly generous – jokes that made the cut forced all those alleged howlers out? Was it the first misguided and/or hackneyed joke that fell flat? The second? The… just don’t make me count to twelve here. In fact the only time I chuckled in the entire film was when a character became enraged and Jean Claude Van Damme performed a shirtless finishing move in his eyeball.

There were another 119 minutes and 55 seconds to endure on either side of that chuckle.

Soooo, let’s see what cracked the ‘starting five’ of jokes and forced those 700 no doubt crackers out? Well the excruciating sequence in which Ron Burgundy meets his African American female producer (Meagan Good) and cannot respond with anything more coherent than ‘Black’. Hey I know this is set in the 70s – which apparently is hilarious in itself – but that shit was played out and racist in the 70s. It gets worse when Ron later meets the family and can’t help but ‘act black’ even while the rest of the dinner guests maintain a polite and urbane discussion.

Again hilarious takes a back seat to squirming uncomfortably. Even on the couch at home, I wondered if people were silently judging me – even though I didn’t laugh.

Yes ‘Stay classy’ indeed. I can only imagine the gold that was left on the cutting room floor – and how happy it should be to not be associated with a film like this. 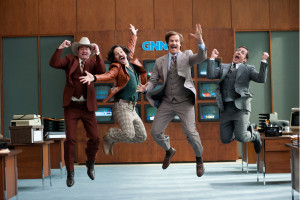 After the film lazily cribs the first 15 minutes from Blades of Glory (which despite being awful is head and shoulders above this), Anchorman 2 settles back into it’s comfortable rut. The same rut that Will Ferrell calls a career.

Namely, he plays a guy who, despite being inept in every way, maintains a career that he is impossibly ill qualified for. Everyone bar him – and this case his three similarly useless offsiders – stands slack-jawed and astonished at his every hijink, every moronic act and every inane comment made in the name of ‘humour’… remember the “black” stuff? Funny.

This time around Kristen Wiig gets to be dumb in public for a few tiresome minutes too, mostly while facing Steve Carrel’s one note character Brick (Hint: He’s dumb). And together the five ‘stars’ form a fearsome mass of mediocrity, spouting all forms of miscellaneous noise rife with misogyny, racism and plain old stupidity, headlined by the occasional exclamation by Ron along the lines of *someone famous’* *genitals*. In some order.

“By the chlamydia of Carole King!”

Those two took me two seconds. I only wish Ferrell took as long writing the rest of the ‘jokes’. If you choose to quote such dribble, you Sir / Madam, are an idiot.

B-b-b-but there’s cameos. Again from people who are for the most partially talented and varying degrees of mostly amusing – and then near those there’s Kanye West.

…And we the viewing public are expected to laugh right along. I mean he has a moustache! And Steve Carrel is funny! And Paul Rudd! And… well that fourth guy who says ‘Whammy!’ a lot is NEVER FUNNY IN ANYTHING. But you get the point.

Rob Schneider has ‘obnoxious douche struggling in unexpected situations’. People – even gullible ones – tired of his antics years ago. He is a very deserved punchline in his own right now.

Will Ferrell has a lock on ‘obnoxious douche doing and saying things that should get him sacked from jobs he should never have gotten’. So far it’s got him through a dozen or so films and millions in earnings, with no sign of slowing down, let alone stopping.

And somewhere, hard working comedians sit for hours at desk writing clever jokes that will never be heard.

Final Rating – 3 / 10. Two hours is too long even for a decent comedy. This is the van crash in Inception run at .1% normal speed, and containing far less jokes than that Christopher Nolan chucklefest.

Oh, and as far as ‘Maintaining the Rage’ goes. My willpower is already sapped, killed by the depression brought with the realisation that my scathing words will do less than nothing to stop this money making catastrophe from earning millions. Even as I vomit in disdain, Will Ferrell becomes richer still…

Instead I will think local, and will seek to erase all trace of this film from my memory by killing the few remaining brain cells with beer and pizza. That’ll be quicker and more satisfying…

While I try to throw a joke or two into proceedings when I can all of the opinions presented in my reviews are genuine. I don't expect that all will agree with my thoughts at all times nor would it be any fun if you did, so don't be shy in telling me where you think I went wrong... and hopefully if you think I got it right for once. Don't be shy, half the fun is in the conversation after the movie.
View all posts by OGR →
This entry was posted in Crappy Movies, Film, Love & Hate, Movie Reviews, Playa Hatin', The 7th Level of Suck. Bookmark the permalink.