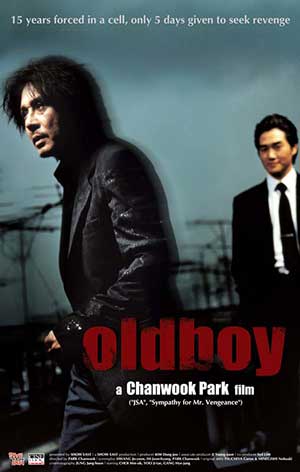 I’ve dreaded writing this film up, I am positive I can’t do it justice.

If you haven’t seen Oldboy before (and you’re 18) stop, drop and rent it. If you have hopefully I can give you a chuckle or two, or at least not ruin the memory of this all time great.

Thankfully the first title clears up my constant conundrum, the format of the director’s name – Chanwook Park all the way.

If you’ve seen more than one of Park’s films (and you owe it to yourself to do so) you’ll see many familiar faces, it seems he knows who he can and can’t trust and generally favours the same actors again and again. Most notable among these is Choi Min-Sik who appears in almost all of Park’s films. In this he is the mighty Oh Dae-Su.

Before we worry about that: Take any 15 year stretch and consider what you would miss if you were taken out of circulation. Using the last 15 years for an example: No mobile phones, DVDs or Blu-Ray, ipods, reality TV (That would actually justify everything else), Clinton is the US Prez, Johnny Howard the Australian PM, the mighty Brisbane Lions do not even exist, the Gulf War 2 – Junior’s Revenge hasn’t started, Global Warming is laughable, Worldcom and Enron are kicking along full steam ahead and Madonna is only in her 70s and still inexplicably considered attractive by the mainstream.

At the opening of the film Oh Dae-Su is drunk and belligerent, apparently this is nothing new for him, only today is his young daughter’s birthday and no time to be getting thrown in the drunk tank. Upon release his buddy makes a phone call is made to his understandably concerned wife, he turns around to find Oh Dae-Su gone. It will be 15 years before he – or anyone sees him again. 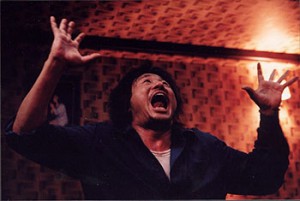 Those fifteen years hardly fly by for Oh Dae-Su, he is confined to one room and one room only, with the most basic of amenities and a single TV to view the outside world. He is fed through a slot in the door and occasionally gassed, and when he wakes up he finds himself groomed.

As you would expect 15 years on your own creates some spare time, time that he spends contemplating his life, his actions, who might have put him in his present predicament… and what he will do to them if he is ever released. Seeing that his wife has been murdered on the news and finding himself as the primary suspect is pretty much the cherry on the sundae.

Then one day without warning: gas – awake – OUTSIDE!

Oh Dae-Su, now 15 years older and with the same amount of confused ideas and desires running through his head immediately sets about catching up for lost time, he tests his fighting skills with some success, then his taste buds, having been restricted to eating exactly the same meal every day for 5,475 days (that’s 15 years – I have a calculator). Before he can do that he is randomly handed a mobile phone and a wallet. Now think back to when mobile phones came out, then think of an older person, perhaps a parent, and remember how they handled the initial task of operating a mobile. My Dad has had one for over a decade and still sends me blank SMSs while he is looking me up in his address book! But as with all things Oh Dae-Su is a pro and handles the new device with aplomb when it actually rings, which is after chowing down on a live octopus (in a scene that gave the film notoriety initially to Western media).

The voice on the other end of the phone is calm and not familiar to Oh Dae-Su, and after receiving the simple message he simply passes out in the restaurant. 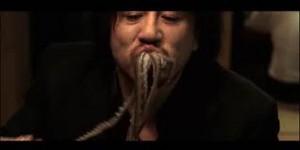 “Do I have something in my teeth?”

Oh Dae-Su wakes up later in the home of the sushi chef that prepared his meal, her name is Mido and she is fresh-faced and about 20ish. Upon hearing Oh Dae-Su’s story (and fending off an awkward semi-rape attempt) Mido agrees to help him in his search, they start with trying to track down the source of the dumplings that were Dae-Su’s staple diet for 131,400 hours (calculator!!).

There is a lot which follows that I can’t or won’t explain, suffice to say that Dae-Su’s primary goals of Who and Why? are answered eventually. 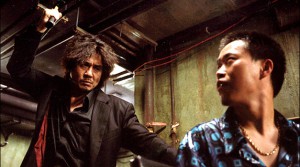 There is much violence, some amazing scenes and visuals, with perhaps the 15 guys in the hallway – with a hammer, standing out, and the plot moves along swiftly. You never really have time to think too deeply about things, which is a plus because then you learn as Oh Dae-Su himself learns, and the payoff at the end is… memorable.

I’m the first to admit I didn’t see it coming the first time around, even the second viewing with full awareness was still quite effective. It practically demands repeat viewing, as knowing enables you to pick up other details the next go around.

Oldboy isn’t for everyone, it is obviously subtitled so that rules out a lot of people off the bat. As mentioned it is quite violent and handles some fairly tricky and confronting subject matter.

It is in essence a revenge flick but it is so much more than that. Everyone over 18 with a sound grasp of logic owes it to themselves to watch this film instead of just “settling” for the next 90 minutes of crap that Hollywood churns out.

Final Rating – 9.5 / 10. Only the “ant on the train” scene shits me. The rest is magnificent, even moreso the first go around.