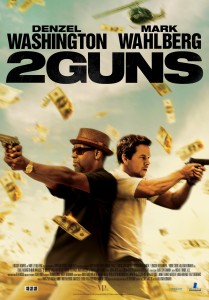 Whenever something comes along to fundamentally change film, it takes a good 15 – 20 years for the real impact to be felt. Sure you get the instant quick-buck rip offs emerging in the wake of any success, when disaster films, animal attack films and sex comedies become momentary flavour of the month stuff.

But it takes time for the impressionable lads who devour this stuff while the parents are out timer. Time to interpret, absorb and place their own spin on things; I love that but it would be even better like this.

Stig (Mark Wahlberg) and Bobby (Denzel Washington) are both on the same team, although for a long while they actually think that they are not. If this sounds confusing it is because it is, way more than it needs to be in fact.

Anyway once these two wisecracking ‘supercool in the face of danger’ types find out that they are both not who they seem to be, which makes them on the same side – only the other one – (stay with me here) the action heats up.

A bank robbery brings the attention of the CIA, drug dealers and eventually even the cops. The result being pithy quips, car chases, fist fights and shootouts leaving many men – and chickens – dead on both sides of the US/Mexican border.

The dialogue is salty, the action frequent and bloody, the camera moves flashy and zoomy, the cast better than the material warrants (Paula Patton, Bill Paxton, Edward James Olmos, James Marsden and others) and the nudity (it’s an MA film kids) very worthwhile.

Denzel continues to challenge Liam Neeson for the title of the elder statesman of action, with the dour Irishman ahead by a broken nose, and Mark Wahlberg continues to feature in wildly diverse films while simultaneously decrying most of them in interviews.

As mentioned at the top 2 Guns is a prime example of a bastard child of genre changers. Written by guys who watched Infernal Affairs (or the English version The Departed) with characters created by someone with a Pulp Fiction poster on his wall and directed by a big John Woo action fan. With only a few changes it could have been The Other Guys 2. Without Denzel and Marky Mark it could have been any other instantly forgotten direct to DVD action flick. With a bit more CGI it is another Wanted.

With such parentage the modest triumph of the film is gained through adhering to cliché and formula to even elicit such comparisons, and for the most part it at least does that. However like a librarian covered in henna tattoos and stick on piercings you get the sense that while it’s fun to play dress up for a while, this isn’t who they really are. But it is how they want you to see them for now. And for this couple hours that’s nearly enough.

Final Rating – 6.5 / 10. Trying to reinvent a genre by imitating those that have done just that finds the filmmaker doomed to repetition. It might not be original, but that isn’t always a bad thing when the source material is good.