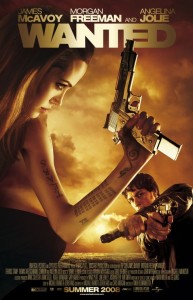 Russian Director Timur Bekmambetov has an undeniable flair with visuals and a reasonable knack for hosting an action sequence, which accounts for the two best sections in Wanted, his best English language effort to date.

What TB doesn’t seem to have a grasp on is what is genuinely cool, and therefore his films becomes confusing mishmash eps of ideas all trying to burst off the screen simultaneously.

There is also the real possibility that I share the same idea of ‘cool’ as Marge Simpson, and I am hopelessly out of touch with just how rad this all is to the right demographic. (A clue that I might just be into something may be a I just used ‘rad’ in a sentence.)

Young apathetic self loathing office boy Wesley Gibson (James McAvoy) is both bored and stressed at the same time. He hates his office job and overbearing boss, and is quietly positive that his so called best made is banging his so called girlfriend (he is).

Then the most aesthetically anorexic of assassins shows up to shake him from his stupor. She is Fox (Angelina Jolie), a member of the ancient organisation of assassins called The Fraternity, that despite being top secret and hush hush nonetheless manage to deem performing hits in somersaulting cars in broad daylight ‘low key’.

Fox tells Wesley that his Dad – who he never knew – is dead, and that not only was he an assassin, he drove a cool car, had a cool gun and was by all accounts a cool cat. Way to go Fox, not only will Wesley never meet his dad, now he has more reason than ever to regret it. but wait there’s more, young office boy Wes has been hand picked to be his replacement to take down his killer-dad dad-killer.

Fox takes Wesley to meet the team, they are lead by Sloan (Morgan Freeman) and feature a number of other cool cats who know that the essence of coolness is to stand so strategically spaced about a room and to barely acknowledge the new guy, unless you can acknowledge in a cool manner that is.

Wesley finds his induction program bloody difficult, and by that I mean bloody and difficult, but nothing that a good bath of wax nightly can’t solve.

Then Sloan shows Wesley how targets for assassination are relayed by a magic loom that passes information in magic sheets of fabric that only The Fraternity can read.

Hey don’t blame me, all of this shit really happens!

Wesley eventually moves into the field, where bendy bullets, flipping cars, groomed eyebrows and tattooed bodies are the norm. He is given the job of taking out Cross, the man named by Sloan as his father’s assassin, a man who was once a member of The Fraternity.

There is an action sequence on a train that is frankly awesome and easily is the best point of the film. If TB could bottle these moments more regularly, and then find someone to write dialogue that doesn’t make anyone old enough to shave cringe, he’d be onto something more substantial.

Unfortunately much of the remaining moments in Wanted amount up to little more than a mismanagement of cool. At least this film managed some moments, last year’s Abe Lincoln Vamp Hunter boasted many of the same moves but missed the point entirely.

Final Rating – 6.7 / 10. Another first at OGR. I’ve never granted a 6.7. I have today because I think that Wanted is definitely worthwhile to the right audience, but I think it is equally frustrating for the wrong one. The unfortunate thing is that both sides are only slightly apart. Suffice to say if you like action, there is something here to elate or infuriate. At least it won’t leave you in the middle.