At a conceptual level at least Bloodrayne had a chance. It cannily cast Amazonian (and admitted nudist) Kristanna Loken hot on the heels of her Terminator 3 coming out party as the sexy half-vampire Rayne. It eschewed the box-office helping but credibility killing PG rating in favour of violence, nudity and more serious themes, then went and amassed a grab-bag of recognisable actors from all over to fill the numerous roles in the film.

Then of course it allowed Uwe Boll in as the director, and our carefully laid foundation had a giant turd placed upon it… 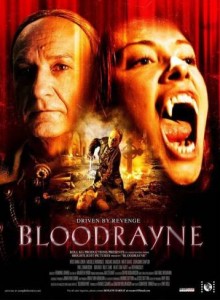 It is alterna-medieval times, where people still carry swords, animals are currency and human life is cheap – even more so since vampires are known to roam the land feasting on the blood of humans.

Michael Madsen, Michelle Rodriguez and a Sean William Scott impersonator are vampire hunters, proud mullet wearers and awful actors (people seem to forget that Madsen delivers dialogue in such wooden fashion that it only sounds realistic if he is given ever so dry lines to ready. Anything else sounds awful. His dialogue in Bloodrayne is all kinds of anything else).

Rayne is a circus freak, a woman who once cut, can regenerate and heal her body by drinking blood (maybe we can all do that and are silly for not giving it a try – and how did she find out about this trick exactly?), leading to her ‘trainer’ proving this night after night in a travelling sideshow. This might be a career choice for some, but Rayne wants more. In fact upon her escape from captivity she informs the first people that she comes across that “I only wish to kill vampires”.

Gee I hope there’s money in that then love.

Further to her vampire killing wish, we learn that Rayne really wants to kill a specific vampire. He is Kagen (Ben Kingsley), a menacing vampire boss of sorts with an army at his disposal and death in his eyes. For his part Kagan also wants Rayne dead, as she is very much the daughter he never wanted.

So initially we have half vampire daughter who hates her full vampire daddy while a trio of bad acting vampire hunters pursue them both.

By the way it never gets easier to understand than that. Instead of a linear narrative Boll throws ye olde kitchen sink at things. Peripheral characters are introduced to justify either nudity or violence with neither being especially worthwhile. In one sequence Meatloaf appears as some sort of indulgent pleasure seeking scumbag surrounded by half naked hookers, then five minutes later Billy Zane is reading his lines as if they were only written on his palm in texta five minutes before. I can’t tell you why either are in this film, then again I simply don’t care.

And neither should you. It shouldn’t be as surprising that Loken moves like a duck wearing Crocs in fight scenes, and like a donkey on rollerskates in others. I mean she was a cyborg in her only other film. Even the scene where she and ‘not Sean William Scott’ get it on has no reason to exist and no connection to the rest of the tale.

The sets look expensive and the production values are OK, it is everything else that sucks. The story makes no sense and carries no interest, the acting is across the board atrocious and the dialogue as wooden as the stakes that should be mercifully putting vampires to sleep permanently to save us all from a sequel.

In a film where the cast are uniformly apathetic Michael Madsen and Billy Zane do battle for ‘worst actor’ honors, with my vote going to the perpetually disinterested Madsen. Where is QT when you need him now Mr Blonde?

But really this is an ensemble award with everyone involved at least partially guilty. When Rayne finally ascends the throne (spoilers be damned) the film is over, only Boll knows no mercy rule, meaning we have another 10 minutes of pointless stuff still to come, and a further 8 minutes of credits!

…if there can be such a thing.

Final Rating – 5 / 10. Lower your expectations ladies and gents, this rough ride will only get rougher from here. 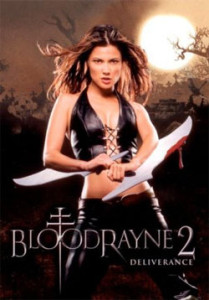 While Bloodrayne was only a minor crime against humanity the fact is it wasn’t awful.

Amazingly enough with the Wild, Wild, West sequel director Uwe Boll has managed to create something different to anything I’ve ever seen before; a film you can watch without watching.

Never before have the credits started rolling in a film and I sat there wondering if it had started. This is a film where so much nothing happened that I was forced to contemplate whether it existed at all or if I am finally making my last descent into madness.

In a sleepy town of Deliverance in the American west nothing much happens. There couldn’t possibly be vampires here… No damn it I don’t care about the DVD cover, I am positive this is a vampire free settlement!

Maybe the railway line that is being built to join the town will change things in the future.

Maybe the shady types that lurk in the town’s inns and bordellos know more, but they ain’t talking.

Then again maybe the well dressed brunette cowgirl has a theory or two of her own, she sure shoots up a few of the more ornery locals real good.

Apparently there are problems beneath the dull exterior of Deliverance, kids have been going missing and the most public of the bad guy looks like he lead singer of an emo band and has an accent that places his origins firmly as no fixed address. Oh, and he also has a mirror but no reflection, which brings two questions and a realisation.

Question 1: Why even have a mirror if you’re a vampire?
Question 2: Why bother to use it (like he does in one scene)?

The realisation should already be underwhelming you.

Where Bloodrayne was muddled, amateurish and baffling, Bloodrayne 2 is the cinematic equivalent of a tumbleweed, a wholly unremarkable, entirely non-useful 100 minutes with no reason to exist.

Somehow in a vampire film they decided that the best way to kill vampires is to shoot them, with special bullets granted but I don’t see why to bother with the vampire element if you’re only going to shoot them anyway.

The only plus that B2 can claim over the first film is that the production is better and the acting less reprehensible, or at least less overtly abysmal, aside from that it is as forgettable as a bland urban landscape, a Keith Urban song or a Karl Urban film.

Final Rating – 4 / 10. The worst crime a film can commit may be that it does nothing. Despite having the basic tools Uwe Boll somehow opts not to use any of them. 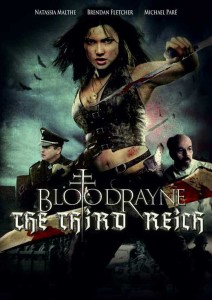 It’s testament to the charisma and personality of the ‘star’ of Bloodrayne 2 & 3, Natasha Malthe, that I did not even recognise her as being the same actress.

In fact I remember thinking ‘Gee the new Rayne is top-heavy’ so maybe that answers the question ‘what did Natasha do in between crappy sequels?’.

But enough about new improved cleavage for now and back to the film  (if I must). Having dulled our senses with the original ye olde Bloodrayne, then out us to sleep with vamps vs cowboneheads, Boll takes the easiest road travelled and brings back old faithful. I mean when it comes to bad guys who could argue vamps vs Nazis?

Boll sure does love the easy targets, I mean what’s next, vamps vs baby seal clubbers? Vamps vs parents who leave toddlers in hot cars?

In any case Rayne has joined the local resistance to put a dent in the invading Nazi forces, as we see in the opening sequence which proves again that Ms Malthe was cast for her measurements and not for her skills with the blood-blades (which if it isn’t trademarked it should be).

Speaking of measurements, we pause for an inexplicable – but easily explicable – scene in which a wearied Rayne heads to the local brothel for a nude massage. Fair enough too, Nazi kills his taxing on the muscles. But wait there’s more. After being rudely interrupted by the sound of a hooker being beaten, Rayne dispatches with the offending Nazi with a ‘physical warning’ then ACCEPTS THE RESULTING FREEBIE LESBIAN EXPERIENCE OFFERED AS A REWARD!

Apologies for the cap-attack, that was just so insane that I felt it was warranted.

Of course no arguments here, perhaps Boll realised that he just made B2 with a hot unknown star and never bothered to have her take her kit off and sought to remedy it. In any case this ridiculous and pointless scene is the highlight off the trilogy. (Sorry, I’m a guy, that’s just the rules.)

The story follows that a Nazi Commandant, bitten by Rayne and left for dead, survived and developed vampire powers, and assisted by a mad scientist, powers that he would use to infect other Nazis to develop a super army.

Upon becoming aware of this oversight, Rayne teams with the local resistance to track and kill this threat before he can carry out his plan.

Despite being lazily plotted and acted (there is another scene late in the film where Rayne and some resistance guy get it on while in a prison car for no reason), B3 is mercifully short and less boring than the previous two films. And that is what Boll is left with, receiving credit for being slightly less boring and keeping things brief.

Well done Mr Boll, and to quote Rayne from the closing moments of this film “Guten tag motherfuckers!”

Final Rating – 5.5 / 10. After the mess that was the first film and the absence of anything resembling entertainment that defined the second, Boll twigged at what was missing and included clumsy and unnecessary B movie nudity. Well played. 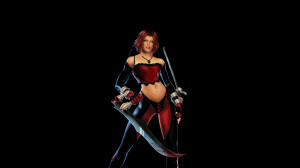 Final Trilogy Rating – 5 / 10. I thought about it for a second and eventually decided not to doom this trilogy to the Seventh Level of Suck, though the second film most certainly belongs there.

Elsewhere though this is merely the clumsy and ham fisted work of a bad filmmaker, not one of the most celebrated hacks of modern times, a dubbos Ed Wood.

For some reason unknown to me I have reviewed more than a few Uwe Boll films, should we at least congratulate him by pointing out that this trilogy boasts his ‘least worst’ two films?

While I try to throw a joke or two into proceedings when I can all of the opinions presented in my reviews are genuine. I don't expect that all will agree with my thoughts at all times nor would it be any fun if you did, so don't be shy in telling me where you think I went wrong... and hopefully if you think I got it right for once. Don't be shy, half the fun is in the conversation after the movie.
View all posts by OGR →
This entry was posted in Crappy Movies, Film, Movie Marathons, Movie Reviews, The 7th Level of Suck. Bookmark the permalink.