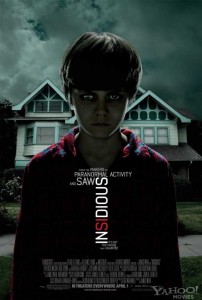 And yet it actually isn’t just another ‘spooky kid’ movie.

Insidious leads with a reasonable title sequence that leads to an overly dramatic actual reveal of the title. For a while the film follows suit.

The early stages of Insidious are straight up haunted house fare, Josh (Patrick Wilson, Renae (Rose Byrne) and their three munchkins move into a new home and are immediately beset on all sides by the usual reasons for self-eviction, random door openings, moving books, brief glimpses at the window and distant but oh-so-close footsteps… there was even one scene I have cried out for ever since we bought a baby monitor in 2006 – pity it’s been used about three times in the last few years and is now hardly original. Still the scene sorta worked here.

Then one of their boys inexplicably becomes comatose overnight.

The following days and weeks find the family becoming increasingly terrorized and not knowing why, particularly at wit’s end stay at home musician Renae.

What were once brief visions and glimpses rapidly seem to grow ever bolder, and suddenly the house is infested with actual ghosts. Big loud brash ones.

So – as everyone in the audience is already saying – the family moves.

In the new house it doesn’t take long to realize that these ghosts consider themselves part of the family, so they tag along too. Barbara Hershey shows up as Josh’s Mum to lend a hand, and a crew of nerdish Ghostbusters complete with an angular faced ghost whisperer type get called in.

Things are moving exceedingly fast already at this point, the finale kicks things up another 5 or 6 notches in silliness.

Where Paranormal Activity reveled in leaving the audience perched on edge, Insidious wants so badly to push you over into outright fear and panic, it’s just that the 137th BOO! HEY! and OOGY-BOOGY! comes across the same as the first one, so they simply put more of them in and make them louder and sillier, culminating in a never ending series of mini money shots that leave you exhausted and jaded, instead of breathless and exhilarated.

Rose Byrne and Patrick Wilson try desperately to lend credibility to this menagerie of the ever more pushy undead, but without success. In fact after the (very) early baby monitor scene I wasn’t moved at all aside from by momentary loud noises.

Teens and young couples on dates will probably love this film, there is no gore, no sex and minimal profanity, add to that the fact that it is not at all scary and it is the ideal risk free teen movie event, (I actually thought it veered incredibly close to self-parody). But for those of us who like some ‘horror’ in our horror films, I advise you to stay far away from this… In-silly-ness.

Final Rating – 6 / 10. The game started with a slow build, but early in proceedings the filmmakers gave up on development and started trying to hit everything for a home run. The longer it went the more they struck out, and the more generous my 6 score becomes in retrospect.