The House of the Devil (Review) 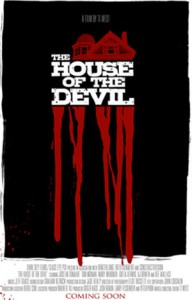 The film is an unashamed love letter to the horror movies of the 70s and early 80s, all the way down to the opening credits, hair and costumes, despite the fact that it was made in the last few years.

Now let’s revisit the genre, in the 70s and 80s horror movies were basically drawn out affairs, 80 minutes of build, only separated by a few fake scares and maybe one or two kills, before finishing up with a finale that would either make or break the film. The Wicker Man, Don’t Look Now, Rosemary’s Baby are prime examples.

While they might be fine films for the era my Gen X eyes think they suck now, I don’t want to waste 80 minutes waiting for what was usually a totally obvious pay-off (Rosemary’s Baby), or one that either bored me to death (The Wicker Man) or made absolutely no fucking sense at all (Don’t Look Now).

Notable exceptions to this rule include The Exorcist and The Omen. Now is there any surprise that these are two of the best horror movies of the era because they are different to those just mentioned?

Back to The House of that Debble, the short version has ominous information about Devil worshippers in the opening seconds of the film, then 80 odd minutes of nothing, then the pay-off, which once again sucks.

The long version though is nearly as short, a young woman needs money to pay the rent so she answers a babysitting ad for quick cash, and once she gets to the house she finds that not everything is as it seems……

The opening blurb of the film shows that a guy named Ti West is responsible for everything in the film including writing and directing, now that we know he can rip off bad films made 30 years ago, let’s wait and see if he can either come up with something original or at least rip off something good.

Lately it seems that filmmakers are basing entire films around a simple question: “What situation would you least like to find yourself in?” Then they made a film about being in exactly that unfortunate circumstance, only they forgot (or didn’t bother) to make it either entertaining or memorable.

This has lead to numerous films including Hostel, Turistas, Martyrs and Captivity boring me to death for the last few years. So if Ti West thinks he can revitalize the genre by doing exactly the same thing, only with flared jeans, fluffed hair and cassette-walkmans in lieu of hotpants, too much makeup and ipods then maybe he should think a little harder.

Final Rating – 5.5 / 10. I’m trying to think now if I was even a little nervous or on edge while watching this but I can’t remember anything more than my notes. Not a good sign 36 hours after watching it.