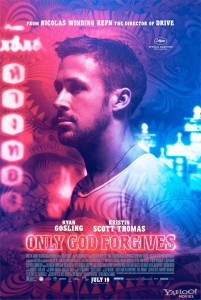 Inspired and insipid look pretty similar in dim light. Very similar in the washed out red rinse that serves as the backdrop for most of the scenes in Only God Forgives, the latest from director Nicolas Winding Refn.

There are really only four characters in proceedings, and all are unlikable and forcibly ‘unique’ in their own right. Three of them are from the same twisted family of likely sociopaths, the other a corrupt cop with a sense of the dramatic and a flair for ultra-violence.

It is the creepy older brother that sets the unpleasantness in motion and the mother that escalates proceedings and essentially derides all around her, vacuuming any warm and fuzzy vibes from any room she is in. While she has the potty mouth and the bad attitude, it is Senior Citizen Barbie’s younger son on the poster, and while Ryan Gosling is both the headline act as Julian, and the most recognisable actor in the film, he is less an actor than a model, standing dispassionately on the periphery as if the director said “Just stand around and look like you”.

The film essentially tells the tale of a misguided cycle of vengeance that takes place in the seedy underbelly of Bangkok. While the familiar moments of over the top violence are in full effect, the characters and action seem to move at half pace, slow and deliberate like they are all contestants in a test of comportment.

Julian is so removed and bland that you want to shake him like a nearly empty sauce bottle so that the real film can come out. It never does though.

Gosling’s dented mug is on one of the posters as a hint that violence is indeed ahead, and every interview I’ve seen or read takes great pains to mention the abrasive dialogue delivered by Kristin Scott Thomas as Julian’s acerbic mother, or the fact that people walked out of screenings. It seems that the expectation is that notoriety might sell tickets, but I can only think of two reasons for people to walk out of Only God Forgives, they thought it might be The Notebook on Tour, or more likely they just got really, really bored.

Word to Mr Refn. If no-one talks about what the film is ‘about’, then it isn’t ‘about’ anything. Good luck having some salty dialogue and a little blood sell your film, but for me the only scene that worked was set in a karaoke bar, and even then the blood curdling screams were still only marginally more alarming than the noise usually heard in such a room…

Like inspired and insipid, there is a point where ‘pushing the envelope’ and ‘thinking outside the box’ move dangerously close to ‘stretching the friendship’ and even ‘jumping the shark’. Nicolas Winding Refn has a few credits in the bank thanks to Bronson, Valhalla Rising and Drive, so I am willing to grant a ‘pass’ on this effort. But at the moment Refn is so deep in his own niche, that if he delivers another film as dull and pointless as Only God Forgives, he will be in danger of getting stuck in that niche, with no-one interested enough to drag him out.