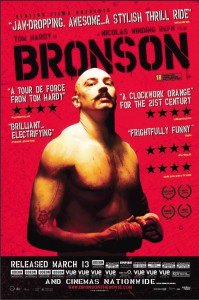 Charles Bronson is apparently the most notorious and well known criminal in England, not for the crimes he committed that landed him in prison but the ones he committed while already inside.

The UK and the USA seem to love talking up and somehow admiring their criminals more than most other nations, though being an Australian it’s hard to ignore the boner that Ned Kelly seems to give everyone here, despite the fact that he stole and killed people. Great helmet though huh?

I know nothing of the real Bronson that this film didn’t tell me, so I am really only choosing to believe or disbelieve another man’s account of him. Assuming I form my view based on this film then my review and opinion is “based on a based on”.

And based on that my opinion is that Bronson is a worthless individual, desperate for attention and fame but without the requisite skills required to deserve such accolades and interest. Violence is his only noteworthy pastime, but usually at the expense of the weak or well meaning, he is a brutal and calculating animal who apparently has been in prison for 34 years and in solitary confinement for 30 of those. He prowls his cell like a caged animal, takes hostages when people stupidly let their guard down around him and then greases his naked body up and awaits those that come to rescue the hostage so he can fight them.

That’s what I think of Bronson, let’s address the film.

Bronson is a brain peeling melange of ideas and devices all seemingly thrown at the screen simultaneously. At times we see Bronson through his eyes as he holds his own personal show for a large crowd of mesmerised onlookers. In other sequences Bronson addresses the camera directly and explains himself and his actions and justifications. It is in these sequences that we learn how Bronson seems to see himself; every misdeed wasn’t his fault and every act that he completes is somehow better or more interesting because he did it.

Bronson as fantasy emcee always over or understates the truth by around 20%, and always in his favour. In his mind the world is out to keep him down and everyone is out to get him and prevent his rise to fame and fortune.

I hope it was the intent of the filmmakers to highlight Bronson’s faux charisma and misguided sense of personal entitlement, that’s at least how I read it. It must be easier to root for the bad guy when he isn’t actually punching your Auntie in the head or biting the ear off your cousin, the well meaning prison guard just doing his job.

The film moves through its 90 minutes with style and pace, even if it really doesn’t have a huge story to tell. Bronson isn’t really shown a lot of sympathy it must be said but he is hardly chastised or shown in bad light either as he reprehensively fucks over anyone who dares try to stand up for him or help him.

I just watched a film that was (almost) about him.

The film was stylish and held your attention, it allowed you to form an opinion on the man that may or may not have a basis in fact. Was it entertaining and worthwhile…

Final Rating – 6.5 / 10. I can’t argue that the film wasn’t powerful, it certainly allowed me to form an opinion and elicited a response that was more powerful than normal. I just wish filmmakers would stop putting these shits on a pedestal.