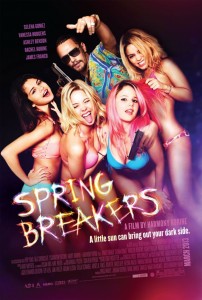 We in bikinis yo!

Stop right there. Are you really telling me that the four gals shown above in a typical pose, are incapable of finding one – or more likely several – young chaperones willing to pay their way to a locale where they might be convinced to lose their bikinis? Despite my sincere misgivings as the likelihood of the film’s basic premise, let’s move on…

Florida does indeed prove to be a hotbed of excess, experimentation and contrived rebellion, with our heroines effortlessly blending in to the frivolity and mass of well toned n tanned flesh. Stuff happens for a while. None of it memorable.

Then Aleen (James Franco) shows up. A white, cornrowed living scarecrow, the constantly Hawaiian shirt and sunglasses indoors wearing Aleen captures the attention of the girls – for no good reason that I can think of. Regardless this skinny, greasy, rapping Scarface insists himself upon the quartet, who exhibit the same good taste and reserve that they have all holiday, and allow him along.

Spring Breakers is full of vivid imagery. Take the sequence where the girls don pink balaclavas, black yoga pants and automatic weapons so that they might stand pretty next to the white piano on the shoreline, where Aleen sings a Britney Spears song…

In reality the rest of the film makes just as much sense, and at times it is little more than a jumbled mess in search of inspiration, featuring some starlets equally keen to shed their former wholesome images.

At one point I read that the director was planning to release a DVD remix, with entirely different footage cut to tell a different story. At the time I thought this was a cool and avant garde idea. Now with the benefit (?) of seeing the first cut I can see how that is very possible, given just how disjointed and confusing this version is.

Somehow this escaped the mainstream critics, most of whom called it some variation of ‘powerful’ and / or ‘brave’ while really meaning “shit I hope my girl doesn’t turn out to be such an easily lead drunken slut”, and praying that by siding with the film they don’t hopelessly appear out of touch.

Now I know I am out of touch. I cannot think like a teenaged girl any more than I could when I was a teenaged boy – which not coincidentally was not at all. But this cobbled together grab bag of desperation masquerading as teenage female empowerment needs more than a fake theme of girrrlll power to wow me.

Despite apparently not being a cheesy exploitative T & A flick, Spring Breakers sure does exhibit the traits of same, boasting more JPM (jiggles per minute) than the entire American Pie series – of which I have seen one film but whatever.

The final film is like a long and drawn out conversation with someone who has ideas but never gets to the point. You desperately want to excuse yourself and leave, but you might miss the moment of genius if and when it finally arrives. Although in this case there are about 137 titties to keep you interested as well.

Final Rating – 5.5 / 10. Say what you like about Girls Gone Wild, at least they know they are crass exploitative trash – and the girls get a t-shirt for their troubles… Not an imdb credit that they will regret in 5 years.