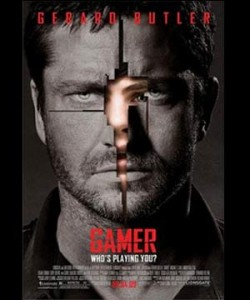 We are rapidly approaching critical mass in my movie watching capability. I have and always will maintain that I will never deliberately watch a terrible movie, which puts more onus on me to wade through all the hype and publicity surrounding each new flick.

If this means that sometimes I catch on late and watch a good movie a year after it is released so be it. But lately I have found myself more a consumer desperate to hunt far and wide to appease my hunger for good movies, sometimes in the most unlikely of places.

This leads me to Gamer, something I ordinarily wouldn’t bother picking up off the shelf to even scan the back, but in this case I watched for two vital reasons:

I had originally pegged this to be a soft M rated film that pandered to the Final Fantasy crowd, but there is an awful lot of potty talk, some effective meaningless violence, it is a movie about video games after all, and the aforementioned T & A combo. This is a definite R film that relishes the rating and makes full use of it.

So Gamer is about a futuristic version of reality where video game development has moved so far that real people are now played as characters in games. The controller is normally an everyday person, the controlee is usually a criminal (for violent games where there is a good chance they will die) or an actor (for games like The Sims).

The creator of this new wave of games is named Ken Castle, we meet him early on being interviewed by a talk show host played by Keira Sedgewick, Castle is normally reclusive and enigmatic, but due to his creation he is one of the most famous and wealthiest men on the planet.

(An aside, almost every character in Gamer has a filthy mouth on them and many spout some outlandishly blue dialogue. For some reason every time Ms Sedgewick did the same I thought “Geez you didn’t need to say that.” Maybe she just projects the Mum vibe, so when she swears you don’t expect it and are genuinely surprised… Or maybe I am just getting old.)

Castle’s initial creation is a real life “Sims” universe named “Society”, controllers can either play as a character reminiscent of themselves (like in Surrogates), or create a character to their specifications. Going by what you know (or think you know) about video game junkies, what do you think most do?

This is also a lot like the Nintendo Wii (and now Xbox 360 in a direct rip so bold they should be sued by Nintendo) and the create your own character gimmick, only the actors being controlled are often made to do things against their will for money.

Predictably enough, as anyone who has played the Sims knows, you can only spend so much time before you get bored, (11 minutes for me) and get the urge to shoot at things, so Castle developed more games.

In one of the most popular games worldwide called Slayers, Gerard Butler plays one of the most successful controlees named Kable (with a “K”), his controller is a young precocious (read arrogant) whippersnapper named Simon.

Slayers puts all the characters at one communal point of a “stage”, then has them run the gauntlet to a safe point at the end of the stage. Those that die are out, those that make it to the safe point live to fight another day. Apparently the goal is to survive for so many stages that you are released and absolved of your crimes.

In a real life situation Simon’s successful character Kable becomes much sought after due to his proficiency in the Slayers’ Universe, and Simon fields many offers to take over control of Kable, some financial, others more immediate and, um, aesthetically pleasing?

Kable is very close to reaching the required number of stages, no-one has gotten this close before and he has a dedicated fan base urging him on as he moves towards his goal and freedom.

In a situation very reminiscent of The Running Man Castle decides he can’t afford to let Kable win and decides to “tip the scales”, Kable decides that his best chance is to get Simon to relinquish control of him to allow him to do what he does best and survive the final battle, as Simon’s controls cause Kable to pause at ties which often leave him very vulnerable to attack.

Similar to Surrogates there is the Resistance fighters who need to show the world that all is not well, including the militant black leader (this time it is Ludacris), and this time they have the catchy gamer tag of the “Humanz”, anyone who comes up with the name Humanz and thinks “Yep that’s cool, that’ll do”, should hand back their marketing degree and walk outside to deal with the real world.

The guy playing Castle is as hammy as most video game characters but is definitely entertaining, there are many other recognizable actors that are in and out of the story without ever having much impact, primarily John Leguizamo whose role seems to be talking to Kable and saying the blindingly obvious to remind the audience of what the stakes are.

As mentioned the action moves at a frenetic pace, there is much colour and eye candy and some over the top stunts and FX, being a video game movie obviously allows the filmmakers to deliberately turn the volume up to 11 and the realism down to 0, which lends itself to a pretty entertaining movie.

Gerard Butler does his best Jason Statham impression as the guy who is steely eyed and determined without ever really doing much acting. In fact this entire movie is strongly reminiscent of Statham’s Crank movie, and would be well packaged as a set with the two Crank movies and Shoot ’em Up. Perhaps the distributors can market it as the ‘European actors acting stoic and shooting a bunch of people in hilariously outrageous ways’ box set?

Before I give the rating for Gamer, I had to think of what the filmmaker was trying to achieve, this is not a film aiming at the award’s season, nor was it trying to pander to critics, it is a fun film that aimed from the get-go to be appealing to a younger audience looking for a little more than a Transformers sell out.

And with that in mind I think it is quite successful.

Final Rating – 7 / 10. Always frenetic, at times inspired lunacy. If over the top action and constant movement are your go, play a game. (Then watch this while you ice your thumbs.)

P.S. Enjoy the 12 minutes (!) of credits. That is one trend that is getting out of hand.