Final Fantasy: The Spirits Within (Review) 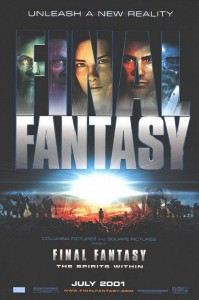 Even though it is hard to tell exactly what the hell is going on in Final Fantasy: The Spirits Within, the fact that things look amazing whilst doing it is indisputable.

In short the Earth was taken over 34 years ago and the remaining human population has holed up ever since in increasingly small pockets. The outside is a barren lifeless wasteland where the phantoms reside, creatures that are translucent glowing things of varying sizes that can pass through solid matter. Touching them brings infection, should they pass through a body they effectively rip the very life out of the inhabitant – this is a game of tag where you don’t want to be ‘it’.

Dr Aki Ross and her mentor Dr Sid (Donald Sutherland) have a theory, they think that the phantoms are actually haunting/attacking the Gaia – the spirit of the Earth. Unfortunately the army lead by General Hein (James Woods) have other plans, they have a giant cannon pointed right at the heart of the Gaia ready to blow away the phantom menace (tee-hee). Team Science thinks this will destroy the very spirit of the planet.

So Aki Ross and a team of soldiers including her ex Gray (Alec Baldwin) head into the barren wasteland looking for the last few of the 8 spirits that can heal the planet – a plant is one, Aki herself is another – as Aki is a spirit as an unwelcome by-product she is phantom-bait, meaning that she and her escorts are rarely safe for long in the open.

As must happen the hothead army guy ignores Team Science logic and in a rush to move things along unleashes all hell. The team are inadvertently stuck in the middle of a huge rush to escape with the spirits encroaching ominously and the clock ticking down on the giant cannon being fired.

The ending is fairly hippy-ish, as is the underlying message that we must be good to Mother Earth (Note: I didn’t say it wasn’t an accurate or false message, just the way it was related here was hippy-ish and a little heavy-handed.)

Final Fantasy boasts an all star-voice cast including all the above plus Steve Buscemi, Ving Rhames and Keith David. The visuals are often incredibly well-rendered, it’s hard to believe this was made 10 years ago. 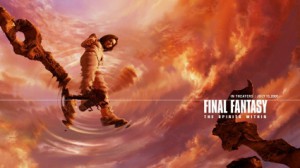 Final Fantasy: The Spirits Within is like a Brazilian supermodel with no command of the English language, whilst it looks absolutely amazing once the dialogue starts it is easy to get a little confused at times, but for the most part you still don’t mind.