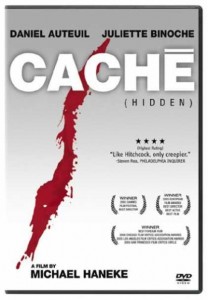 I had three cracks at coming up with a phrase that said nothing. Just watch the film and this’ll make perfect sense.

This is not your Daddy’s thriller, unless your Daddy loves sitiing through 2 hours of precious little action only that culminates in an ending that if you don’t pay attention, you won’t even get.

The film opens in a two minute unbroken single shot of the exterior of a small house / villa type building. Nothing much happens, (including zero music), as people wander by innocently, meanwhile the credits fill the screen as if your computer is shutting down, tiny and almost unreadable.

It’s a tape being played in a VCR, the couple watching it actually own the home, only they didn’t make the recording and have no idea why it has unexpectedly lobbed  onto their doorstep. The couple are 40ish, Georges and Anne, they have a pre-teen son named Pierrot, a shaggy young kid at the age that he darts in and out of the home randomly.

Both Georges and Anne are succesful in their own right, Georges is a TV host with his own chat show and Anne runs her own successful business.

Shortly after another tape arrives unannounced, this one filmed at night, again no  explanation is forthcoming.

Over the ensuing period calls come into the home asking for Georges, and nothing else. Drawings of a bloody child often accompany some following tapes, drawn in childish cartoony style, even Pierrot gets a postcard with a similar crude image drawn on it of a child vomiting blood.

A dinner party held in the couple’s home is interrupted by a doorbell, Georges goes to investigate and finds more troubling evidence.

As you might be with all these seemingly strange and threatening images and tapes arriving at your home, Anne and Georges find the experience very unsettling, even moreso when a new tape arrives showing Georges’ childhood home. Georges immediately takes a trip to visit the home as his elderly Mum still lives there. Although she is fine, she is frail yet immediately concerned for Georges’ wellbeing. Georges too is very troubled, and starts having dreams and flashbacks that start enlightening us a little as to potential reasons behind the tapes and other “presents”.

Upon arriving home Georges makes the rookie mistake of telling Anne that he has a theory as to why these things are happening to them, but then refuses to tell her it. Anyone who is, or has ever been married knows this is stupid, because as soon as you sow the seed you can’t back out and not explain why without a fight at least.

Interspersed along the way are brief, almost subliminal images of a young boy covered in blood.

Given all this tensions begin running high in the household, with Anne expressing more than a little displeasure at Georges perceived lack of trust.

Acting on his theory, Georges visits the home shown in one of the tapes, tracing it using signs shown in the videotape. The home is that of Georges’ childhood companions from earlier dreams and flashbacks about, and definitely one that he is surprised to see, though apparently not as surprised as the occupant, named Majid.

As he was a childhood friend Majid is now in his mid forties, and looks a little worse for ear, and his home is hardly the classy, well appointed home that Georges and Anne share. Georges flat out accuses him of perpetrating the nasty deeds, and Majid flat-out denies any part of, nor knowledge of proceedings. During the following conversation, it is obvious that Georges has events in his youth that he is not proud of, apparently events that impacted Majid in some way. Through the discussion it is Georges who is far more confrontational and threatening, while Majid passively sticks true to his story and calmly relates his memories and subsequent history to Georges.

This is where the story kicks up a notch, and aside from saying that further tapes arrive, and further wrinkles are introduced that are even more disturbing and confusing to the couple I will leave the plot events there.

The strength of Cache is that it doesn’t move in a “standard” cinematic way, we start knowing precious little and up to the bitter end we still can’t be sure of what or who is responsible for the events. There are not many red herrings or clumsy near-misses that would liven up proceedings. The couple start out not knowing and don’t really get much closer to the truth for much of the film.

When the credits do roll, those viewers that aren’t playing close attention will miss the payoff. I know this, I was one of them that said “what the fuck”, and rewound the DVD. Apparently it is said that the director of this film cares not for notoriety or commercial success, you either get it or you don’t, and while I admire that in theory geez would I have got the shits if I saw this at the cinema and had to ask everyone else what happened as they walked out.

Final Rating – 7.5 / 10. A solid thriller that gives you nothing. one for those that love a good simple story and actually thinking through events, rather than being handed the answers.