Resident Evil vs Underworld – Battle of the Over-Rated Franchises 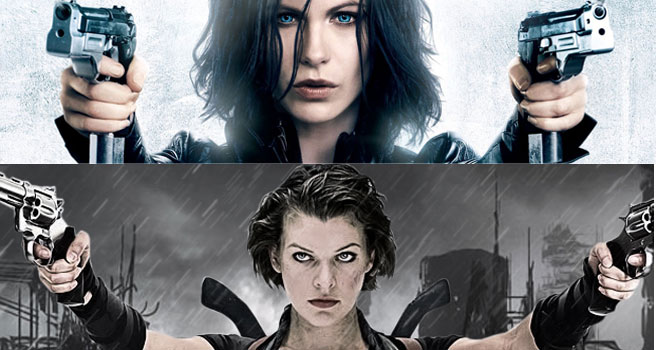 Bad music is everywhere. But it is avoidable. All you need to do is avoid the radio at all costs, steer clear of popular TV, ignore the 23 music channels and so called ‘talent’ shows that proliferate every non-music channel, oh and not hear an ad, go to a gym, shop at a store or walk along a street where cars might drive with the windows down.

OK bad example. But with a bit of work you can avoid most bad music. Or at least ignore it.

For some reason some movies aren’t so simple. Given I have a predilection for vampires, werewolves, and action movies featuring same. Oh and films with hotties in fetish outfits.

I guess what I am saying is that I stupidly – and sometimes knowingly – watch terrible movies despite knowing well in advance that they will suck.

Today I will visit two examples.

Resident Evil is based upon a video game, directed by a Brit with a patchy track record and stars a former model turned actress who peaked with her first role in The Fifth Element. And has made nothing of worth since.

The franchise is 11 years old and up to its 5th edition. It has grossed nearly a BILLION dollars worldwide and garnered an average 25% approval rating on Rotten Tomatoes.

Underworld is based upon a gimmick of vampires vs werewolves. It is directed by a once promising young director who has grown increasingly unreliable, and stars an actress known more for her men’s magazine pictorials than her prowess or cinematic resume.

The series is in its 10 year and 4th edition. It has grossed over HALF A BILLION dollars worldwide and garnered a 30% approval rating on Rotten Tomatoes.

In short; Two franchises, nine films. A billion and a half dollars and not one decent film to show for it. You’d also be hard pressed to find someone that calls themselves a ‘fan’ of either franchise. And if you did you’d sure look at them funny.

To keep it all above board I have personally selected several categories to pit these two behemoths against each other. Then I have rigged the whole thing more or less to ensure that the franchise I like more hate less came out on top.

The fact is, there are no winners to be had here. If you simply MUST check out either franchise for yourself, I suggest the original Resident Evil and the most recent Underworld.

Strangely enough in the least important category of all Resident Evil prevails easily. The soundtrack to a film is almost irrelevant, unless its especially egregious like the Aerosmith dominated Armageddon or anything starring J-Lo…

Crappy B movies almost uniformly slap together a bunch of young up and coming – read: cheap – angry bands and have them drone something tuneless about death, sadness, lost love, apathy or all of the above. The funny thing is the Resident Evil films have about a 10% success rate in picking tolerable songs, a substantially better track record than in other more important areas.

Underworld on the other hand has a more standard 0%, meaning the songs do nothing for me whatsoever. 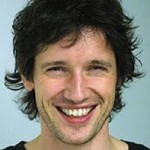 Paul WS Anderson (Resident Evil): Anderson churns out almost a film a year. At least some of them are worth a look in a ‘weekly rental’ kind of way. His best might not be much, but the original Resident Evil was OK, Death Race 2008 a guilty pleasure and of course Event Horizon a minor cult classic. It’s worth pointing out that there are a lot of sequels and lazy crap on the cv too. 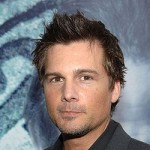 Len Wiseman (Underworld): Wiseman is by comparison fresh meat, with the first two Underworld films, Die Hard 4 and last year’s Total Recall atrocity. With an eye for the shiny and a love of the unoriginal, nothing jumps out as a highlight. My vote for ‘best’ goes to Die Hard 4 for not shaming the franchise like this year’s 5 did.

Actually an easier pick than it might first have seemed. Neither should hold their head high, but Anderson has three worthwhile films to Wiseman’s one.

Clear cut winner here. Cue up the sound bite where Milla Jovovich nearly sighs when asked by a reporter as to why they keep making Resident Evil sequels; her answer? “When people stop paying to see them.”

Not ‘when we run out of ideas’ (happened long ago), not ‘the studio demands them’ (at least honest). No, we’ll stop when people wise up that they’re paying for shit.

So P.W.S.A. throws in some flash, breaks some glass, drags back a few characters forms previous films that we didn’t care about and then slows it all to buggery. And he’ll do it again because we morons keep pressing the bar like hamsters.

Amazingly both directors met their leading ladies on set and managed to snag them as their bride. A fair accomplishment on the surface, but let’s take a closer look. 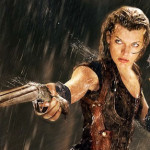 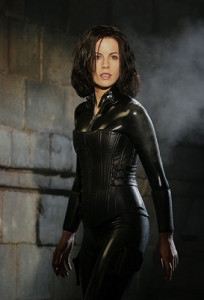 Considering I named Jovovich in the inaugural ‘either way all-stars’, a crew that could be either gorgeous or horrible depending on the angle, this one is a no brainer. Beckinsale couldn’t be ugly if she tried.

Resident Evil is based upon a game of which there are several editions. At least they try to bring in the characters and events of the games, so I’ve been informed, I played the early games but always fast forwarded the cutscenes.

Underworld is a custom built franchise which ran out of ideas early once it worked out that werewolves are just plain shitty monsters. Are that it has been constant reimagining of the source material, with an ill thought out prequel already on the books and the werewolves all but written out in favour of the hairless and better looking in vinyl Ms Beckinsale.

Sure Res Evil is dull repetitious and totally worthless, but at least it is consistent. 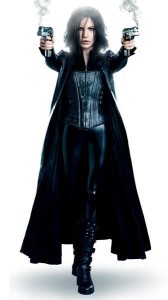 As a slayer Beckinsale rocks a skintight black vinyl ensemble that is awe inspiring to look at but must squeak and squelch like buggery in reality. 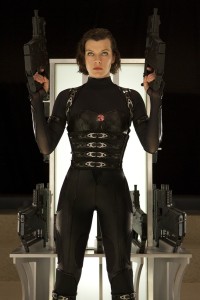 In Resident Evil on the other hand almost everyone looks like they just popped out of the Hellfire club. None more so than Alice, whose various outfits are almost always covered in unnecessary buckles and pointless accessories.

Each movie has characters that look like they belong in a 50 shades of grey dream sequence, but at least the Underworld outfits are consistent and seem vaguely practical.

Both franchises are guilty of falling in love with unnecessary slo-mo – especially when there is glass to shatter in eye popping ways.

But no-one loves stretching things out like Paul WS Anderson, the man who inspired me to suggest that his 90 minute films might actually take 50 minutes to watch if played at full speed. 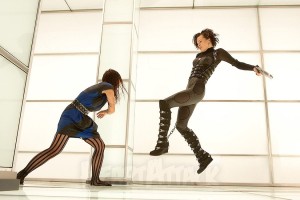 Neither option is particularly credible, but while the fast cut and ninja quick editing of Underworld was confusing and frustrating, it is not in the same league as the ridiculously OTT wire assisted gravity defying stuff that goes on in Resident Evil.

The most recent film had about six scenes where Alice cartwheeled photogenically, in slo-mo of course, over and through opposition in order to catch something she either threw, dropped, or just felt like catching.

(Jackie Chan used to say he hated scenes where one character crossed a room in a film to perform even the most menial tasks without doing something eyecatching. To him it was a waste of film and time, so he would put in an athletic moment or a creative hitch. Resident Evil does the same thing, but even with all the CGI, wires and money in Hollywood at its disposal, there’s no way it will ever best Jackie Chan and his effortless creativity.)

Too many characters to keep track

Actually this should be a tie. Not only does Underworld have vamps vs werewolves – which should be easy – it has several sub groups within both ‘clans’, especially among the pastier crew.

I mean aside from Beckinsale and the always forgettable Speedman, there was Victor, the other guy they kept in ice, the rest…

Resident Evil is worse, mainly because they are all so loathsome. But the deciding factor for me was when they brought some back and ‘shocked us all’ by having them villainous this time. My reaction to this was something along the lines of ‘wait, who is that? Why should I care? And ‘so they’re evil or just awful actors?

Turns out it was both. In both cases there is a fair chance I could keep up if I cared. If I cared. 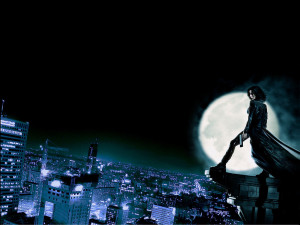 Underworld boasted vampires vs werewolves, then culled off the werewolves and brought in humans. 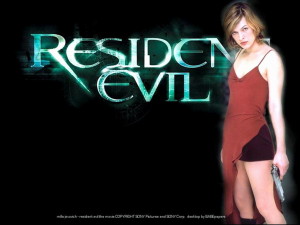 Resident Evil was based upon a violent and tense zombie game, but since the first couple films the brain hungry undead have been few and far between.

The fact is that for years now neither franchise offered much more than what was on the poster, namely a chick in a suit pointing guns. But both came with implied entertainment, so neither was honest and true to label in reality.

I am giving the category and the title to Underworld though, solely on the possibilities opened up by Underworld 4, which was actually violent and action packed. It wasn’t great, but then none of the 10 films offered up in the combined filmography has been, but it was a decent action flick, which is what these films at their best aspire to be.

It would be most accurate to say that where these two franchises are involved there are no winners, least of all us poor movie viewers. But as long as the posters showcase airbrushed hotties, and as long as FHM keeps interviewing said hotties near release time – backed by the latest scantily clad spreads of same – we will keep futilely lining up in the hope of entertainment.

Underworld is a pretty bland and disappointing franchise, but it offers the best chance of entertainment, both in terms of its past, it’s present, and hopefully it’s future.

And Beckinsale is 367% hotter than Milla Jovovich…

While I try to throw a joke or two into proceedings when I can all of the opinions presented in my reviews are genuine. I don't expect that all will agree with my thoughts at all times nor would it be any fun if you did, so don't be shy in telling me where you think I went wrong... and hopefully if you think I got it right for once. Don't be shy, half the fun is in the conversation after the movie.
View all posts by OGR →
This entry was posted in Crappy Movies, Film, Love & Hate, Playa Hatin'. Bookmark the permalink.