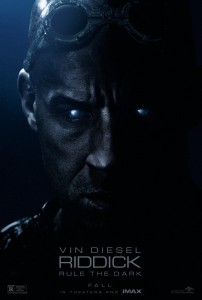 Riddick is a creature of blind confidence in his own abilities. Take the first 15 minutes of his self titled third outing. He awakens on a strange barren planet dazed and confused – even more than normal. After taking a moment to gather his thoughts Riddick breaks his own leg – to fix it… duh – and mere minutes later he stops his own heart to avoid drowning. As you might expect after such feats, taming a vicious dog-like beastie is child’s play to Riddick… “I will call you Fluffy”.

Riddick has personal ‘bullet time’ for his fights, and an inexhaustible supply of handy weapons secreted on his person to be summoned when eerily appropriate. He is a human Swiss Army knife with half the vocabulary.

Actually there isn’t much dialogue period in these early stages of Riddick. While this is initially strange, once the voiceover kicks in (oh, you mean you didn’t know Riddick gets to narrate his own life?) you instantly yearn for the silent times. I mean “There are bad days, and then there are legendary bad days”. Who wrote this? Vin Diesel?… oh right.

Of course even the strong silent types can only roam the alien wastelands for so long. When not one but two ships show up to collect the bounty on his head, Riddick finally gets to play… Here he finally gets to unleash all that pent up aggression.

Riddick (the film) mercifully eschews the confusing mythology and even more confused competent actors in favour of rampant testosterone and silly B movie cliches. (Karl Urban pops in for a cameo to validate the B-ness.) These are all good things by the way.

For a character allegedly notorious for his violent tendencies and profane attitude, Riddick has previously taken to the PG high road, much to his detriment. The Chronicles of Riddick only served to show what a threadbare character Riddick was, and to confirm by comparison what an unlikely success Pitch Black was. Here Riddick is at his arterial severing, beheading, macho best, pausing from the bloody festivities and brooding only to attempt to ‘convert’ Katee Sackhoff’s lesbian character.

With the film bearing his name Riddick finally finds his niche, namely pointless plot free violence that plays to the star’s strengths.

Speaking of Diesel, he shares Riddick’s inexplicable self-confidence. In fact he has built a career on it. Let’s face it, without films with synonyms for quick and/or irate in the title being on the resume there is no way in hell this would get a cinema release.

And straight to DVD is where this film belongs. Despite having none of the muscles of The Rock, none of the charisma of Statham, and certainly none of the moves of Chan, Jaa or Uwais. He’s been here so long that we have forgotten how ordinary he is in all ways and just accept that he is here.

And now, so is this film. Which, like Dredd before it, isn’t such a bad thing.

Final Rating – 6.5 / 10. I would gleefully fill a rained out Saturday afternoon with a dozen such films. But that doesn’t mean that I can endorse shilling twenty bucks for this.

(If anything Riddick would have been the perfect prequel to Pitch Black, with only a minute amount of tinkering required. Watch it and you’ll see how right it would have been.