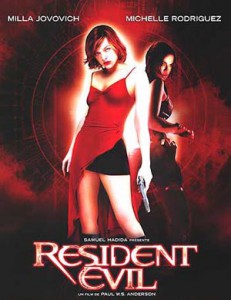 You know it’s a B-Movie if Michelle Rodriguez makes the poster.

First things first: Milla Jovovich is a card-carrying member of the “Either-Way Allstars”, in that depending on the day she can be breathtakingly gorgeous… or fucking horrendously ugly. And I don’t mean according to the role, like Charlize Theron in Monster, I mean sometimes when she tries to look good it just ain’t happening on that day.

Resident Evil was Milla’s first “I can do it all by myself role, and the double edged sword of being in a pretty good and more-successful-than-they-thought film is that so far she has had to star in two shitty sequels, with another (likely shitty) film on the way later this year.

Resident Evil was alright though, and for a while it was a minor highlight in the awful game or comic book to film group.

Resident Evil takes place in an underground facility run by the Umbrella Corp, located beneath Raccoon City, both names classic examples of why foreign game developers should consult with native English speakers if they plan to prepare a game for that market.

Have you ever heard of a city as stupidly named as Raccoon City? Would you choose to live there? Wouldn’t you fully pull the piss out of anyone that you knew that did live there? I mean seriously… And if they worked for Umbrella Corp wouldn’t that only sweeten the deal? I mean Umbrella Corp?!? Fuck me.

In essence the big-nawty Umbrella Corp (tee-hee) has made some whiz bang virus that has apparently been unleashed in the massive underground research facility, and the thousands of staff working there have been locked in to prevent the virus from escaping.

The full implications of the virus are unknown, and the impact of the virus on the trapped staff is not shown in the early goings on, we do see in some initial moments that it isn’t all sunshine and rainbows for everyone though.

Milla J wakes up nekkid on the floor of a running shower, how long the shower was running wasn’t calculateable but her pale white skin showed no signs of “pruning”, I looked… for a long time… in freeze frame.

Milla looks around to find herself in a large mansion-y building, with evidence that she lives there, and clothes carefully laid out for her. Now dressed in a strange fanboy-fantasy outfit of a red dress over combat boots (which she later adds a black leather jacket to. Huh?), Milla has no memory, no weapons, or no understanding of why she is there. At this stage I’m not sure if she even knew she was supposed to be acting, all she did was look around with wide eyes and her lower lip perpetually dropped for her early scenes.

A strike team shows up with a squad leader who looks very much like a robot (mouth closed though), it appears that Milla has something to do with things, how or what we don’t know yet. At least she now has friends.

And a name, Alice.

The team announce their intentions to move into the underground facility, now dubbed the Hive, to see what exactly the fuck is going on. They enter through a sneaky door in the Milla-Mansion.

After a short zip down into the Earth on a subway style train system the crew end up at the gates of the underground Hive, from here on in numerous variations of “JUMP” scares are the order of the day, each with an accompanying “BOO” noise.

Their mission takes them to where the AI system that runs security for the facility, called Japanese-game-developerly the Red Queen, “she” is personified by a hologramatic young girl with a British accent, who thankfully seems also programmed to spout menacing dialogue when it is deemed to be most unsettling.

Like a rapping granny, a “black-acting” old white guy or a talking animal in an ad or kid’s film (non-animated, cartoons are supposed to talk), it just gave me the shits.

There is a cool visual, but logically stupid scene in a security hallway, where a series of laser patterns sweep the hall, starting with a straight laser that they can step over, and progressing to more complicated patterns that begin wiping off various digits and limbs, before expanding into a Julianne style dicing pattern that shreds all inside.

Why have the first three or four patterns before bringing out the sure fire crowd pleaser? This isn’t Who wants to be a Millionaire where things gradually get harder until one guy wins, there are no winners here! (But it did look cool, so let’s move on.)

So anyone who has played the game knows that it is about fighting Zombies, and as 99.3% of viruses nowadays in films create nothing but Zombies it seems why don’t we just acknowledge that they are already here?

Once the Zombies arrive it seems clear that the crack squad aren’t really that well-trained, many of them simultaneously lose their shit and they seem to scatter in all directions, there is also much infighting and bickering, and it takes them forever to realise that a headshot drops their assailants.

Alice rapidly comes to realise that whoever she is and however stupidly she is dressed that she has skillz, and that these skillz are effective VS zombies and zombie-dogs alike. (Although if you watch the couple scenes where she fires a gun pay attention to her eyes, she blinks hard with EVERY shot fired. I guess some models turned actresses just aren’t cut out to be cold calculated cinematic assassins.)

After escaping the initial onslaught the survivors discover they have only a limited time to escape before they are forever shut in (and therefore dead), which you would have thought relevant information to know prior to heading in!

There are various sub-plots that mean little and add nothing to the film from this point. The zombies seem to inexplicably vanish from the film for very long stretches after the first headlong rush and a new CGI-assisted menace is introduced, I guess sort of like a level-boss in the game really.

Final Rating – 6.5 / 10. Despite all the sarcasm and crap written above this is actually an effective little movie, it can’t help it that it was followed by two sub-terrible sequels.