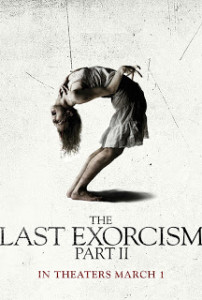 The Last Exorcism was a low budget found footage piece centred about a shonky priest performing fake exorcisms, and how he dealt with the realisation that he might be out of his depth with the quite possibly actually possessed Nell.

It was made for the price of a cinema ticket, and made fifty million dollars.

Is there really any surprise that it turned out to not be the last one?

Well if that wasn’t I’m pretty sure this will be. An uninspired effort that commits the biggest sin in horror – that of being dull.

After the events of the first film Nell is found bloodied and trembling, and for some reason in the bed of some random guy. (I shouldn’t complain. It was the only 90 seconds in the movie with any tension whatsoever.) She also seems to have regain her undead evil baby body quite quickly (you should’ve seen the first film by now). Maybe calisthenics burns calories.

Nell is placed in the nicest nuthouse in New Orleans, where all the girls are friendly and welcome her, and the facility manager wants nothing but the best for all of his patients… Wait is this still a horror movie?

The new lease on life agrees with Nell. Within weeks she has no more nightmares, visions or unwelcome visitors. She also has a job, friends and maybe even a boyfriend. But as she wanders the streets of New Orleans without a care in the world, people look on behind masks.

It isn’t long before the visions, voices and dreams – all accompanied by loud noises, people jumping from nowhere, and the best friend of the bad horror movie, the cheap dream scare.

It’s no longer a question of whether Nell is possessed or not. Whether the events of the first film were real or imagined by her. The film could tell us one way or another and it would be just as effective. Or just as ineffective in this case. The fact is that with zero chance of an original concept being developed, the filmmakers resort to a few cheap scares and some clatter masquerading as something terrifying.

This film isn’t possessed by anything more than a desire to squeeze some more cash from a flukey premise already bled dry by a dozen pretenders emerging in the last few years. The only thing I was possessed by was a sense of boredom.

Final Rating – 5 / 10. I just hope this thing doesn’t dupe enough guys into renting that it turns a profit. Otherwise this series might have more ‘lasts’ than The Rolling Stones do ‘last’ world tours.