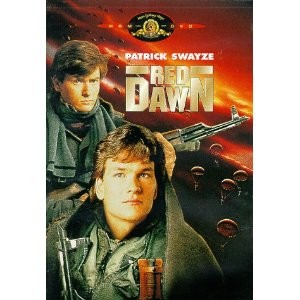 No time for zits during war.

A couple decades ago irrational American patriotism was at an all time high while the average IQ of the action flick was at an all time low (neither is a bad thing by the way). The fly in the ointment was the looming threat of a new abstract concept called ‘political correctness’, which meant you couldn’t just label a nationality, ethnicity or religion as bad without good reason.

To get around this Red Dawn just lumped a bunch of different potentially threatening nations together and dubbed them all scum, neatly avoiding any one of them piping up and saying ‘awwww your stupid fictional dopey teenager’s movie is picking on us’.

So amid global chaos the ‘Rest of the World’ (ROW) parachute into the heartland of America, where the trucks, hats and butts are all bigger than common sense would suggest. These nasty ROW forces – a mishmash including Cubans and Russians plus others – set to interning the locals and weeding out those likely to resent the intrusion that invading forces tend to represent.

Sound game plan. But didn’t they know AMURRICCA is filled with AMURRICANS!?!

Apparently not, so when the chutes begin to fall the locals head for the hills. Well if the film is to be believed only the kids do.

Led by Jed (Patrick Swayze), the initial group numbers only five and includes a young Charlie Sheen, with Jed at around 20 by far the eldest. For many months the boys lay low in the mountains, not knowing what has happened to their families and home town, and living off the land, unaware that they were a good forty miles behind enemy lines in their own native land.

Sensing that the action had cooled down somewhat and desperate for information, the boys head into town for a reconnoiter. They learn that the USA is indeed at war, that the enemy are intent on taking over, and in a scene that elicits much forced emotion – and provides great motivation for what follows – that they should abandon any thought of being with their families again.

With this unpleasant and unfortunate news the mountain recluses reluctantly become mountain (based) gorillas *ahem* ‘guerrillas’, performing well co-ordinated raids and ambushes on the ROW troops at random and becoming a thorn in the side of the enemy. These pre-pubescent partisans are joined at various times by a couple of young girls and later a pilot, united in their hatred of the invaders and the love of their country.

Cue the anthem and the pic of the flag flapping proudly and defiantly in the breeze.

The only thing that made my toes curl was the constant war cry of ‘Wolverines’ based upon the town’s high school football team, but given my knowledge of teens and American teens I can actually see that happening.

Red Dawn is actually OK as far as hopelessly dated 80s action flicks go, faring better than Cobra and many other long since forgotten films of the era, this despite the fact that the concept has long since been rendered implausible. In fact I would go as far as saying that despite its flaws and limitations, Red Dawn was handled about as well as you could expect.

I hold grave fears for the remake, especially given that the ‘political correctness’ thing has continued to grow unabated to the point that people are apologising about every second week for silly yet hardly inflammatory comments, and for the over-reactions of others. 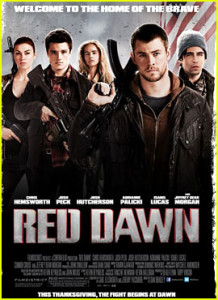 I’ll leave the ‘why bother?’ for another time. The fact is they rebooted a film that was only decent to begin with, then let it sit on the shelf for a couple years in the hope that Chris Hemsworth’s appearance in The Avengers might cause ticket-buyers to queue round the block.

Unfortunately although the reboot has a few decent action moments – and I mean ‘blink and you’ll miss them’ moments – it is hardly a worthy update, and actually ends up as an Exhibit A of sorts for the generation gap between Gen X & Gen Y.

In the peaceful town of Anywhere USA life is quiet and a little sleepy. That is until the parachutes fall and the North Korean army invades. (This being clumsily fore-shadowed throughout the opening credits.)

In one of the decent moments soldier-on-leave Jed (Hemsworth) rounds up his kid brother Matt (a perpetually confused young McLovin’ lookalike) and his scungy buddies that include Tom Cruise’s adopted kid (what Will Smith’s kids weren’t available?) and head to a cabin in the woods – though thankfully not the Cabin in the Woods from the terrible film featuring another Hemsworth.

In perhaps the only upgrade from the former version, the filmmakers cut out about 15 minutes from the original by combining the kid’s motivation and introducing the main enemy in the one scene.

After this comes the lesson in the diff between Gens X and Y. Where the first film had Patrick Swayze’s Jed as the undisputed boss after a brief argument, the paper thin 2012 version has the younger kids continually questioning Hemsworth’s Jed and second guessing his abilities and tactics, and need I remind you that this is a returned war hero, not a mulletted redneck in a beat up ute?

Another regrettable decision is the insistence that everything have a reason or a justification. Again the 1984 film left the moralising and deep thinking on the shelf, here every action has repercussions and every decision needs arguments before during and after something happens.

The film has the inevitable raids, ambushes and explosions, albeit with more polish and bigger nuisance value, which leads to still more problems. First, the mindless Wolverine chants that annoyed me so in the first film are ratcheted up to 11 here. The 1984 film simply had the screams and a few graffiti tagging as the kid’s way of letting off steam, here the Wolverines are a movement with devotees and fans (I ask you when did mindless chanting become so cool?).

Second, these aren’t just some pesky and brave kids making do and maturing before our eyes, they are heroes to one and all, and make a discovery that could prove the key to tilting the balance of power away from the North Korean invaders – who by now have been joined by the Russians.

This is the chasm that exists between Gen X and Y, both in terms of the plot and the filmmakers. In 1984 you could tell a simple and cool little story, shoot some guys and wander off. In 2012 there can be no such thing as a simple story, it has to be BIG, and if possible have a Pro USA message bleated throughout as these belligerent kids turn the war by themselves.

All this and they still manage to shoe-horn in a product placement for Subway – Gen Y sure can multi-task!

And I’m not even going to get into the scene where the Wolverines dig foxholes in the middle of a vacant block in the middle of the city, from which to emerge and gun down soldiers pursuing their ‘bait buddy’…

…OK I will. First when did you dig the holes with all the armed soldiers wandering about? Second, why? Third, you didn’t need to emerge from the holes anyway, as they rounded the corner you could simply have shot them. Fourth, why did no-one come after them with all the gunfire?

Fifth… oh who cares. Why should I put more thought into this than the guys who made it?

Red Dawn 2012 possesses none of the scruffy charm of the original film despite keeping practically every core plot element from it. This is probably because every new addition to the film is simply an unnecessary and unwelcome contrived formula device developed in the past 30 years of increasing mediocre filmmaking.

And if this is ‘Young Hollywood’s Elite’… gulp.

I mean ‘why bother’?

Final Rating – 5.5 / 10. I know I have made this out as the worst film of the year – it isn’t – but when you suffer by comparison with a film that was only OK to begin with, that can’t be good.

While I try to throw a joke or two into proceedings when I can all of the opinions presented in my reviews are genuine. I don't expect that all will agree with my thoughts at all times nor would it be any fun if you did, so don't be shy in telling me where you think I went wrong... and hopefully if you think I got it right for once. Don't be shy, half the fun is in the conversation after the movie.
View all posts by OGR →
This entry was posted in Crappy Movies, Film, Movie Reviews, Worthwhile Movies. Bookmark the permalink.