Save the Green Planet (Review) 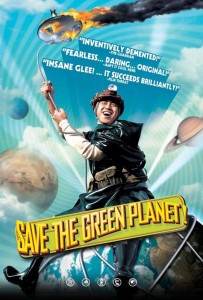 I’ll keep this brief. If nothing else Save the Green Planet is proof that the Rotten Tomatoes ratings system is deeply flawed.

Categorised as a film with at least traces of horror, Save the Green Planet stands near the top of the 2000s horror genre with an 87% critical approval rating. This is perplexing and infuriating.

Perplexing because the film is about as scary as an episode of Barney the Dinosaur, infuriating because it is – for lack of a better word – shit.

Aliens are coming. At least according to one over-prepared and over-zealous couple. They kidnap a well know CEO of a large company, hoping to unmask him as a genuine outer space creature within the week available before the lunar eclipse, at which point the invasion will be imminent.

But after the first dozen minutes or so all I wondered was how long there was left before I could end this unpleasant experience. 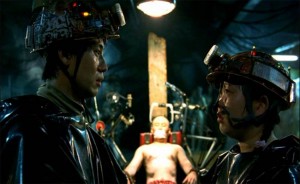 In fact although I cannot reveal a so-called twist I can say that there are several total logical anomalies that render it nothing less than stupid. This wouldn’t matter if there was value to be found elsewhere, but things are barren there too. Save the Green planet is not funny, not that wacky after the initial set up and not creative at all.

I wish I saw the same film that the 87% of critics saw, I wish I found the 3 minutes of lazy social commentary clumsily shoehorned into the latter sequences worthy of lauding. I wish I found this a work of offbeat genius. I wish the fact that it is subtitled somehow immediately adds a 25% ‘uplift factor’ to any critic’s rating system (if this was in English with a bunch of American actors and remade word for word it would be absolutely panned by the same critics that heap praise upon it).

Most of all I wish I had my two hours back, might have saved me thinking “Gee I hate this” 117 times.