The Friday Trilogy Review: Friday, Next Friday, Friday After Next

Here’s why. Or more succinctly, here I ask ‘why?’. 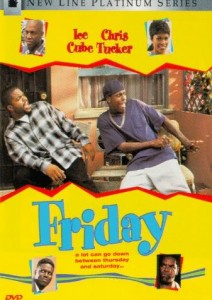 Craig (Cube), has just been fired from his job and as such he is left to wallow in (non) self pity at home. Though he doesn’t seem particularly depressed, as once his mother, father and sister leave for work he has little else to do but sit on the front porch with his part-time weed dealing bud Smokey (Chris Tucker) and shoot the shit, holler at girls and watch the insanity that is his neighbourhood as it rolls crazily by.

Except nothing that happens on this particular Friday is that interesting or memorable. There are but two events that are worth mentioning, the arrival of Debbie (Nia Long) as the local hottie and potential live interest to Craig, were it not for the fact that he already has an especially skanky ‘girlfriend’ in the picture already, and the two headed menace that is local thug Dee-bo and local drug dealer Big Worm, both of whom would gladly do Craig and Smokey harm.

As Craig Cube proves he can act, but can’t do much to elevate a character that is frankly little more than the boring straight man to Chris Tucker’s manic and cartoonish Smokey, the bundle of smoked out nervous energy and rapid fire quotery, Smokey is a shrill perpetual yapper always working the angles and inadvertently bringing trouble straight to himself, and by association, Craig.

The rest of the cast are similarly over the top, an orbiting group of hoochie-mamas, hos, junkies and criminals that – if these films are to be believed – populate much of Los Angeles.

Friday is more a Chris Tucker coming out party than a genuine comedy film, as he went on to show in The Fifth Element and to decreasingly effect in each Rush Hour film whether you like him or hate him you can’t stop hearing him, even if you didn’t want to.

Final Rating – 6 / 10. Not terrible but for the life of me I can’t fathom why this is recalled fondly by anyone but Cube. Friday is little more than a couple more quotes, the obligatory ‘I’m so high’ sequence for the smokers and larger than life characters playing out glorified Benny Hill sketches, only in ‘tha hood’.

I should also point out that at the end the ‘honourable victory’ is only ‘won’ by fighting dirty. But who cares? 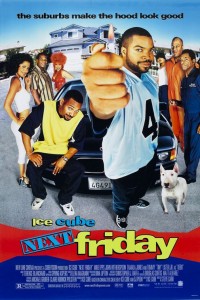 The original Friday was a couple of catch phrases and a big guy with a crooked eye surrounded by mediocrity. Seriously, even if you just read my review above you can’t tell me much more about it.

So what do they do with the sequel? First Chris Tucker – provider of most of the catch phrases and quotables – isn’t there (in rehab is the alibi). Secondly, big cock-eyed Deebo is relegated to a worthless callback, appearing only as the film opens and near the finale. Not that he was much chop anyway, he just looked funny.

Sorry about the unscheduled break. It took a while for the 12 strong horses to drag me back to the TV and 14 Mr Universe aspirants to hold me down and force me to watch his ‘antics’.

How does the rest fare? Well they break out the first shit joke within 5 minutes, and it’s pretty much a boring or misguided humour combo from here.

After the shenanigans of last Friday Craig’s folks have insisted that he leave town. He is shuffled off to Uncle Elroy’s lush suburban pad purchased with lottery winnings and spends the first few hours getting to know the neighbours alongside Day Day (Epps), including the old Asian lady who speaks like a young black man – always hilarious – the drug dealing Hispanics across the cul-de-sac, and most importantly for the movie poster their hot sister.

It is inevitable that Craig and Day Day will fall afoul of the Hispanics, that Craig will bang the sister, and that Elroy will be an exceptionally poor role model, and all predictions lazily come to pass. The rest is so funny it’s not funny.

For all Chris Tucker’s failings it must be said that he is 12 levels higher than the lamentable Mike Epps, who mugs, goggle eyes and gags through every scene as he mumbles his dialogue and waits for the reality police to come and take him back to obscurity.

I don’t know if that comparison says more about Chris Tucker, or less about Mike Epps, either way we should all be concerned.

Final Rating – 5 / 10. Ice Cube has made a career about being deadly serious, apparently ain’t a damn thing funny to him. This franchise has so far proven to be Exhibits A and B. 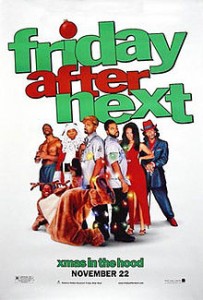 Welcome back to the film series that makes me dread Fridays, at least ones on film.

We rejoin Craig and Day Day who have now made the big move out of Elroy’s pad and into the projects, where they are batching it in a small apartment building.

It is Christmas Eve, and the duo have somehow found a job protecting the crappy backwater mall as security guards, thanks to a hook up from Uncle Elroy and Craig’s Dad who run a soul food shop.

You can see where this is going. A bunch of new – different but same – characters who incessantly talk way too loudly and hope that whatever laugh free noise emanating from their voicebox is latched onto by stoner’s, impressionable white kids and lazy reviewers *sob* fool enough to rent this film some decade after it was momentarily relevant.

The only reason that this ordinary effort is the standout of the trilogy of mediocrity is that it at least tries to be fun, it totally blows off any semblance of plot so that the characters can throw a house party that runs for the remainder of the film. For Craig, Day Day and their relos it is perhaps a reward for completion of a cinematic trilogy, for me it is a celebration of same, but for different reasons.

That’s really all I have to say about this trilogy. I might point out that Katt Williams is kinda amusing as the proprietor of a clothing store named Pimps n Hos – of course – and that I openly wondered just how many other films have a Starletta listed in the credits.

I rambling from the delirium now. I am just so glad it’s over.

Final Rating – 6 / 10. A mildly amusing look at a small shopping centre and the characters, staff and pranksters that frequent it, at least that’s what they would have you believe. They might also suggest it’s the funky, fresh, kick a*s groove of the Summer – or some bullshit like that, instead of the boring conclusion to a tepid, dull and unfunny trilogy that literally owes it’s existence to a guy squeaking “You got knocked the fuck out!”

Final Trilogy Rating – 5 / 10. All the way up to and including the release of The Predator album Ice Cube was one of the most talented, charismatic and dangerous guys in music. It’s a shame that everything he has done in the last 15 years makes him look mediocre and useless.