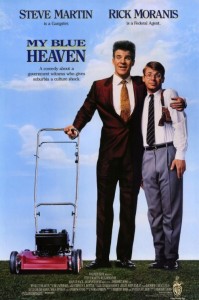 Every good film needs a lawnmower.

I love it when someone gives Steve Martin a character and tells him to run with it. In Dirty Rotten Scoundrels he was a larger than life conman, in Bowfinger a down on his luck director, even in Sgt. Bilko he was a charismatic opportunist. It’s when Martin plays an everyman that things often go awry (Bringing down the house, Cheaper by the dozen, Mixed Nuts).

Well in My Blue Heaven Martin is given the license to go nuts, and nuts he goes. Martin plays Vincent Antonelli *ahem* Todd Wilkinson, a mobster turned snitch awaiting an appearance to testify under witness protection in the small town of Fryburg in Anywhere USA.

Antonelli/Wilkinson – I’ll go with Vinnie from here – doesn’t try to blend in and couldn’t if he did. Within days his wife has left him and the quiet and his only ‘friend’ is FBI agent Barney Coopersmith (Rick Moranis), the man responsible for ensuring Vinnie remains below the radar and alive long enough to testify. Coopersmith actually welcomes the disruption Vinnie brings, as he longs for some real ‘action’ after years of being stuck behind a desk filling out forms. Barney blames this inertia for his own wife leaving him only days prior to bang a pro sportsman.

And if Barney wants some action Vinnie is only too happy to comply. With no other special skills or qualifications he is straight back into the game, albeit in low key fashion; TVs, watches, cars, swordfish… until Vinnie realises that Fryburg is also the home to many other former mobsters under witness protection aliases. Vinnie and the other AKAs set to work on a crime wave the likes this sleepy town has never seen.

But with a trial upcoming and secrecy paramount even when Vinnie gets caught – which is a lot – Barney is left with no option but to have the charges quashed lest his presence become known and the case blown. This enrages the dedicated District Attorney Hannah Stubbs (Joan Cusack), which sets her and Barney at loggerheads. Sexy loggerheads.

Granted My Blue Heaven is a one note premise but a good one, and Martin and Moranis utilise the mismatched character motif to the fullest, especially when they head to the big city for the first hearings. Vinnie indeed does show Barney the excitement and danger that he so coveted, and for his part Barney shows Vinnie that suburbia ain’t so bad.

Martin is hilarious in full ‘made guy’ mode, with all the over the top mannerisms, gestures and sayings that must send real mobsters crazy (those poor guys). Moranis is great as the exasperated straight man often left cleaning up the mess, and Cusack good as the powerless D.A. who wants both to be taken seriously and to have a little fun.

I can’t say that My Blue Heaven will have you falling off the couch laughing or re-evaluating your views on 90s comedy. But if you ever wondered how a real comedic talent might somehow be over the top and under control at the same time – as opposed to the 100% goofery of your Sandler’s and Ferrell’s, you should check out Steve Martin’s performance as evidence that it is indeed possible. And hilarious.

Final Rating – 7 / 10. A great little under-acknowledged 90s comedy made worthwhile by a great cast and the inimitable Steve Martin at the top of his game.