I normally wait until I have a few of these before I put these types of reviews on site. But it appears that Sharknado! cannot be denied.

This one is for the Mastah… 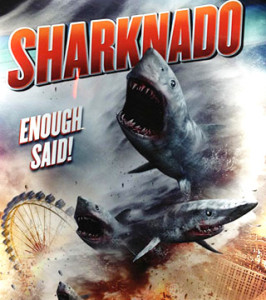 As foreseen by Nostradamus… probably.

As with most Sci-Fi channel movies, most of the work with Sharknado was done coming up with the title. Then it was simply a matter of emailing the agents of once semi-famous actors willing to do anything to stay in the spotlight – Ian ‘90210’ Ziering and Tara ‘tittie out’ Reid.

The finishing touch was achieved by giving a uni dropout $117 to put together the CGI effects.

A tor-na-do full of sharks!

Not bud-get. Not com-mon sense.

No num-ber of winks!

Look you’re either in or out with the title. Sharknado is a license for stupidity and over the top lunacy. So far only Mega Piranha has toed the line in a way that was both stupid awkward and stupid entertaining. Aside from a couple of quotably dumb lines the bulk of the onscreen action remains firmly in the ‘stupid stupid’ category.

Then again, there are a million talentless hacks in music releasing similarly careless dross every year. Hi Ke$ha! So maybe being all hook and zero substance isn’t that big a crime… Plus, it’s always a happy day when I can espouse the virtues of the Citizen Kane of movies greenlit with little more than a title on the script…

But if ineptness was its own reward, the cinemas would be full of student films and Michael Bay would have made three films about giant robots with more on the way…

Final Rating – 5.5 / 10. How sad it is when a film can’t get the ‘so bad it’s good’ mix right. Sharknado is all marketing bait with no hook and no reel to bring all but the most easily satisfied punters in. Seems to have worked though, as Sharknado 2: The Revenge of Curly’s Gold is apparently in development.

Probably be ready by Thursday, I heard they just have to iron out the kinks in Carrot Top’s contract.

While I try to throw a joke or two into proceedings when I can all of the opinions presented in my reviews are genuine. I don't expect that all will agree with my thoughts at all times nor would it be any fun if you did, so don't be shy in telling me where you think I went wrong... and hopefully if you think I got it right for once. Don't be shy, half the fun is in the conversation after the movie.
View all posts by OGR →
This entry was posted in B Movie Haiku Reviews, Crappy Movies, Film, Movie Reviews, Special Requests. Bookmark the permalink.