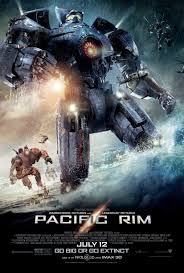 Pacific Rim is a bad film made by a good filmmaker. I don’t mean to say that the film is without its moments or a poor effort. It appears passionate enough. It’s just that the next great ‘monsters vs giant robots’ film will be the first one, and I wouldn’t hold my breath waiting for it. 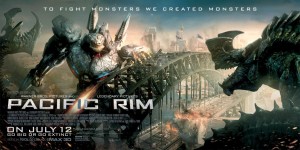 All you need to know about the plot is in the picture to the right. It seems giant monsters have emerged from the Earth’s core through special channels in the crust to take over the planet. These creatures range in size from gargantuan to ‘whoa’, however they are all equally aggressive and for some reason have body parts or apertures that glow.

The monsters are called ‘Kaiju’, but I will call them ‘monsters’. And as is usually the case with attacks on our fair planet, the monster’s initial assaults target capital cities with globally recognised landmarks…

The first attacks were many months apart and consisted of only a single monster, but the time between attacks is rapidly reducing, and the massive walls hastily erected to hold the beasts at bay seem to be knocked down as soon as they are repaired.

Earth’s frontline arrives in the form of equally big robots. Heavily armed – and armoured – these metal behemoths come in various makes and models with differing characteristics and weaponry. The trait all share is the fact that they are piloted by two (and in one case three) people, synchronised together by some sort of mind linkage. This mind linkage requires compatibility, so having like-minded individuals, family members especially, proves most suitable. Controlling the machines requires teamwork and total concentration so as to ignore any distracting memories. It also requires that the two pilots move in unison like players in Dance, Dance Revolution.

The big robots are called ‘Jaegers’, but I will call them ‘robots’. Utilising all of our global intelligence, the powers that be decide to stop funding to the robot department, meaning only a precious few of these last defenders remain. An audacious plan is devised at the site of the Hong Kong channel – named a ‘breach’ in the film – which aims to shifting the balance of power once and for all.

Anyone lining up to buy a ticket does so on the presumption that the monsters and robots will lay waste to their surroundings while pounding on each other, and indeed these scenes will likely provide most of the enjoyment to be derived from this film. The huge figures set to each other with great zeal, literally tearing chunks from each other and utilising anything around them to pound their rival into submission. I especially liked it when the giant robot shook its head after a big fall, as if the giant robot needed a moment to regain its bearings…

The cast takes the film more seriously than you will, with Idris Elba as the mission commander leading the usual Del Toro ‘too many unnecessary characters’ who all try their best to get noticed in the quiet moments in between rounds of the Godzilla Vs Transformers main event.

The other Del Toro staples are evident, the bad – but endearing – jokes, the lunatic scientist, a market scene, and a Ron Perlman appearance. Also worth mentioning that with giant creatures, come giant Del Toro autopsies.

Almost every character gets a speech, a backstory, and most importantly a hero moment. Many also get their own personal conflict and rival as well. I’d like to point out that there are two Australian characters whose accent I often couldn’t understand – and I’ve lived in Australia all my life.

Guillermo Del Toro is a talented director with immense creativity and a knack for finding a memorable visual. The fact is while I doubt there will ever be a Pacific Rim 2, I would probably line up to see it if he made it, such is my faith in his abilities. He is not, however, much of a storyteller, as much as he tries to be. The number of unnecessary characters is distracting, and the long waits between stoushes equally frustrating.

While the fights contain a few moments that will elicit a grin or a chuckle – whether you are laughing ‘with’ or ‘at’ depends on your mindset – they often go on a little too long with the action devolving into a noisy blur. It is these sequences that best define Pacific Rim, equal parts annoying and promising, as we the audience wait for a knock-out punch that alas never arrives.